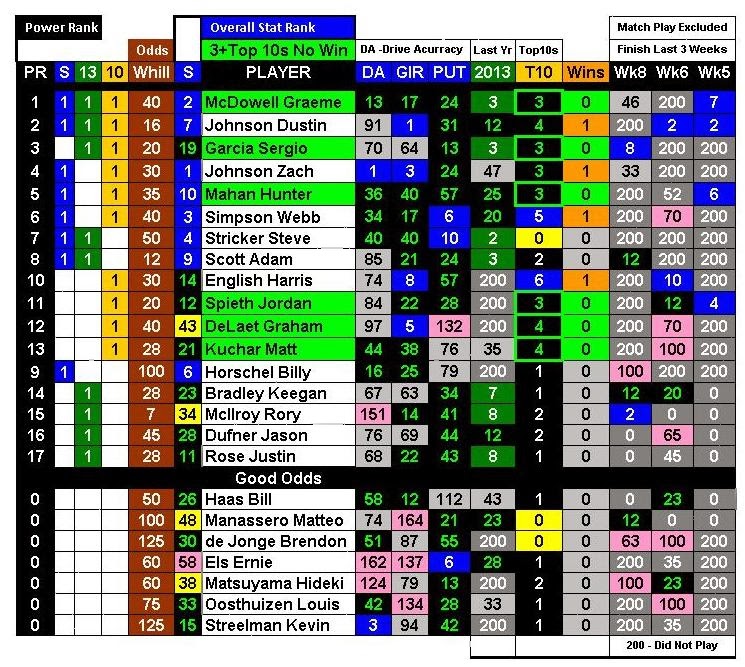 Donald Trump designed this course to suck $450 a Round out of Rich Suckers.  So, it's not designed to challenge pros. I think we will see low scores this week. None of the player have played the new course in competition. Advantage Jordan Spieth - see below.

Jordan Spieth has made a living Feeling out courses and shooting low on the weekend. There is a lot of great competition - but he could Tear that place up and Run Away with this one. I'm staying ont he kid for $100 at 20-1.
Video: Interview Before Doral

Steve Stricker  hasn't played much, but he never does and he  finished 2nd last year. It is a different course this year - but if he's on - he's a bargain at 50-1.

There is a Laundry List of Top Players that could easily win this. Most are Going at Pretty Low Odds, Except Rose at 30-1.

Players Trending or with 3 or More Top 10s Due to Win:
Garcia
Delaet
Kuchar

If your on a Budget - there are a Dozen Solid  Longshots that have a Real Chance:
De Jonge
Matsuyama
Horshell
Els 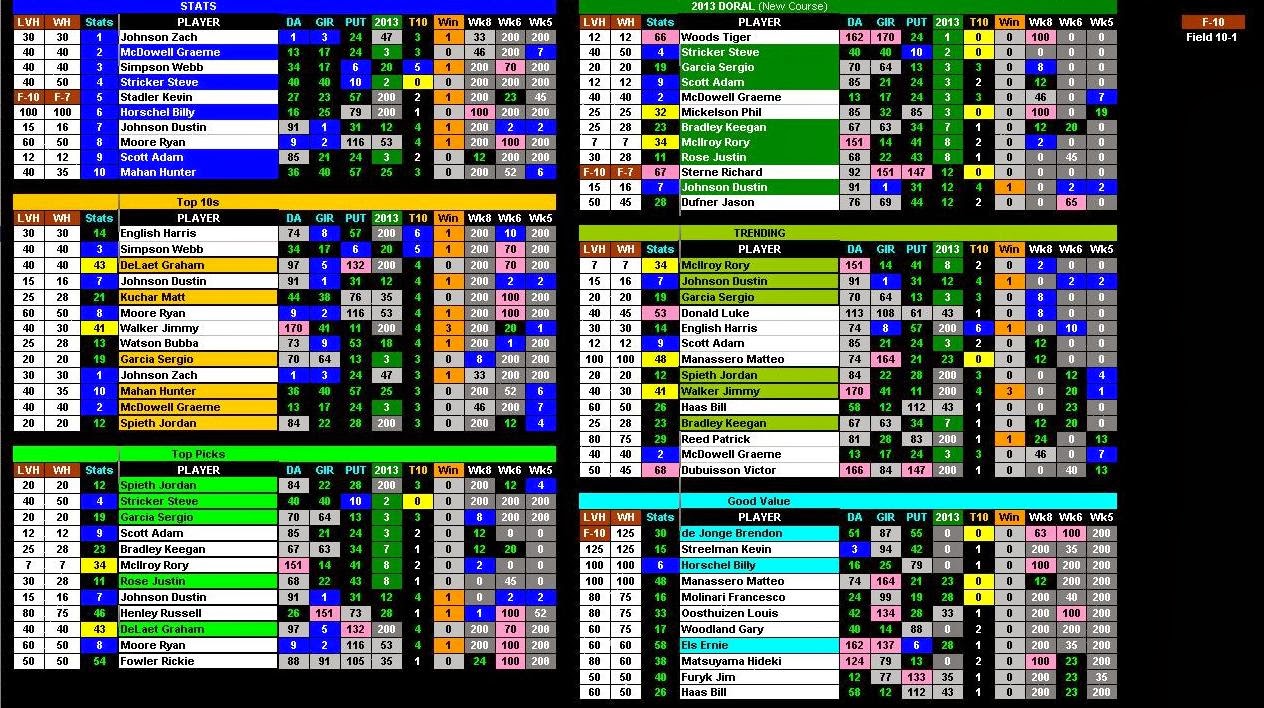 
The Answer is Blowing in The Wind
High winds are making an Easy course Hard. With winds in the 20 MPH range - players are struggling. More of the same is expected today. When I say easy - I mean easy for those who can drive straight and hit greens. Too much Water and Sand to be a bombers paradise.

Calm Winds and Sunshine are forecast for Sat and Sun. It's really a matter of who will survive the cut today and not get too Far behind the Leader.  Those who stay within 4 or 5 of the lead will have plenty of opportunity to shoot low this weekend.  I just hope Jordan Spieth (E) stays out of trouble and makes the cut. If he does - I fully expect him to shoot  7 or 8 under the last 2 Rounds - and tear that course apart.

Yesterdays Rain Delay
Will force several players to finish yesterdays round early this Morning.
There is a 5 way Tie for 1st at just (-3). So, anyone Even or 1 or 2 Over should still be in the Running Tomorrow.
Live LeaderBoard

UPDATE!
NOT CUT
ALL WILL PLAY THROUGH WEEKEND

It now is a matter of not getting too far behind. The wind is blowing Drives, Approach Shots and Even Short Puts - all over the place. Only 3 Players under par so far today. So, chance to catch the leaders when wind dies down tomorrow and Sunday - IF - you're not 6 or 7 over?.

JordanSpieth (8+)
He was Mugged on the 14th and 4 Strokes were stolen.
The Police sketch resembles a large blue monster.
Now he will need to shoot 8 Under Sat and Sun to even have a chance.

Trumps Ego
and Pin placements have taken the entertainment value out of the tournament.  It's not fun too watch. In his interview - Trump actually took credit for good ratings and said the public loves a difficult course. Really? I guess if you like a scoreless football game in 35 MPH winds - played on Ice. Living proof - if they have enough money - Networks will give the microphone to Idiots babbling ego-maniacal nonsense. Yeah..I hate seeing a hole in one or watching a player stick an approach shot inches form the Pin. Much more fun watching them hook balls into the water or sand. Idiot! 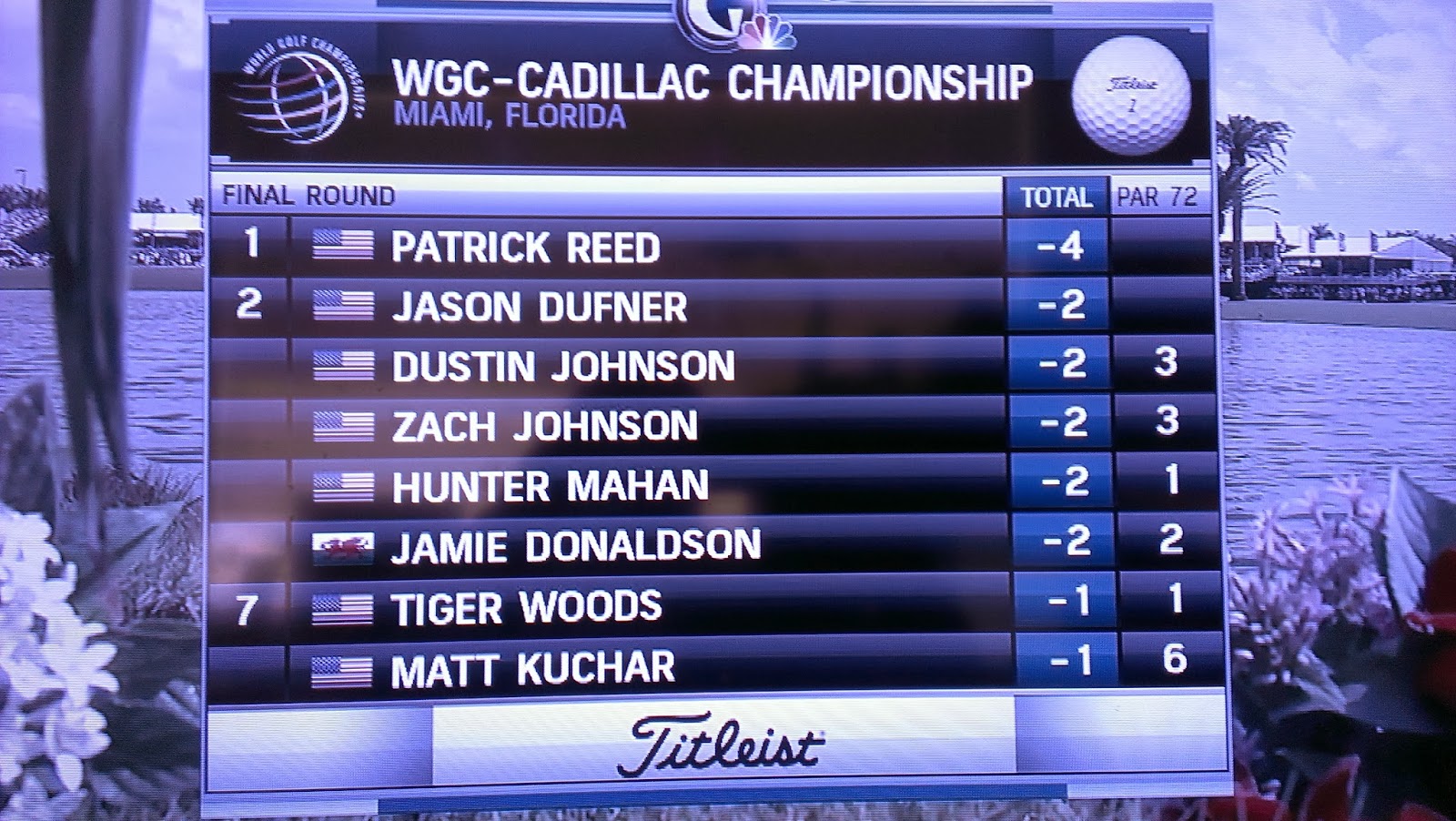 Patrick Reed
in a pregame interview - said he was a top 5 player and can't be beat when he's on his game.
There is an old Mexican saying that translates to - Don't fear the one threatening to kill you - fear the one saying nothing. There are exceptions to that rule and he did birdie twice already to expand his lead at (-6). However, self praise rarely producing edible fruit. Based on that interview - and that alone - I predict a fall for Reed - sometime this round. Proverbs 16:18

Tiger Woods
Missing Fairways again. He has dropped 2 shot back to +1 and his in the sand on 6. In fairness to Woods - he is suffering from back spasms. He did not enjoy explaining to his 6 year old daughter why he had to quit - "unable to move." last week.


Patrick Reed
(-5) Left the door open by not increasing his lead. Lucky for him - no one could make a put to save their life. To his credit - his scrambling for the rough and sand was impeccable. Jamie Donaldson (one of my field bets.)made a move on 17 by sticking his approach within a foot and drawing within 1 (-4) . Meanwhile Reed was in the bunker on 16. From 118 yds - looking at a thin piece of green - on the other side of the fairway. But he kept it on the fringe.
Donaldson pm the Par 4 18th hits the right side of fairway.
Reed On 16 leaves his put from the fringe 3 feet short. But Pushes in for Par (-5)
on the 17th he puts his Tee shot in Bunker. He lays up in fairway. chips and puts for Pa (-5).

Donaldson From the Fairway - with one last chance to Tie. You could see him lose contol l of his swing on approach. Elbows flew away from his body - pushed it right into greenside bunker.
3rd shot from Bunker - 12 feet short. Misses Par put bu inches. In the Clubhouse (-3)
Reed on the Par 4 18th 2 shot lead - Way Short Right Rough. Approach fairway front of green straight shot in. 3rd shot leaves it 300 feet short - 2 puts to win.
PUts to within 2 feet. Pushes in!

Reed Wins!
Something to be said for confidence I guess - or a lead when no one else can score. Just wouldn't repeat that cocky pregame interview again. Congrats Patrick - good luck with the Baby!.
Well... just heard post game interview - still patting himself on the back. Should have shut up while he was ahead. Like Johnny Miller said; It's one thing to close a tourney - that's not what he did. He won because no one challenged the lead and he pared on the final round.  I'll  bet he doesn't win again for a while.