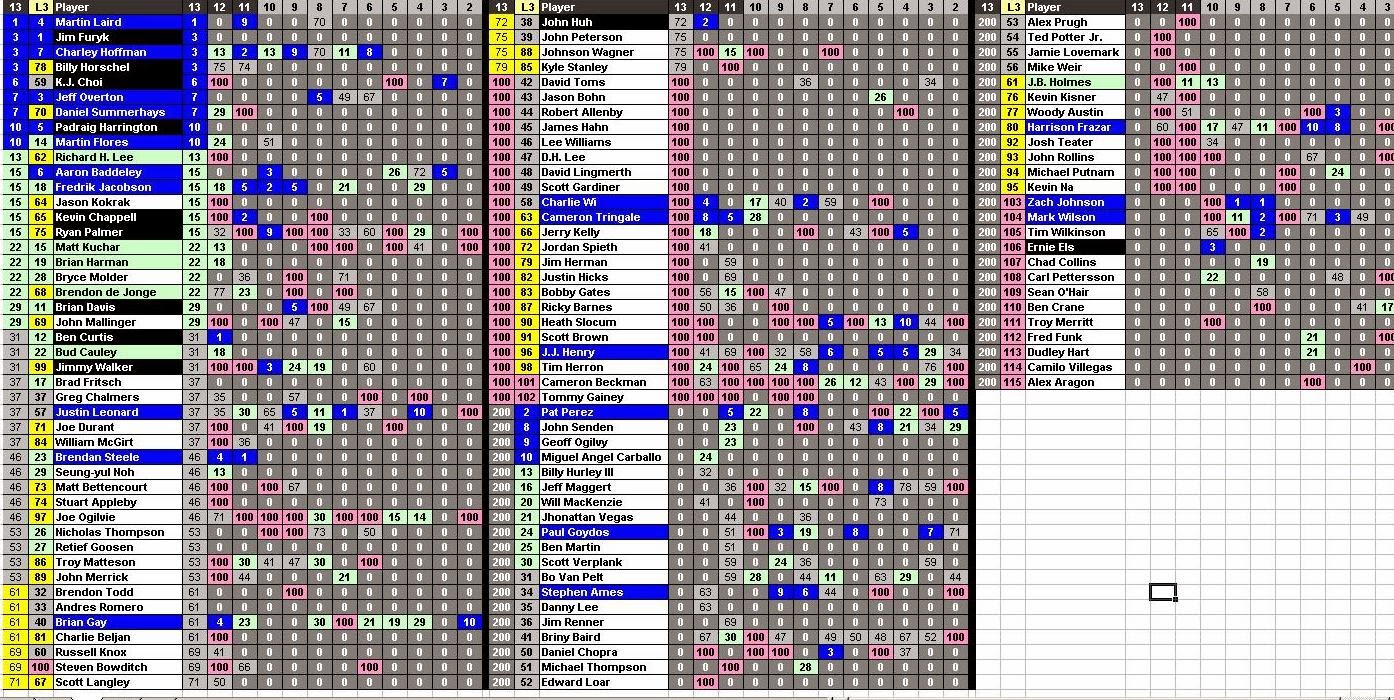 Course
Narrow Fairways surrounded by trees and hazards. Need Good Drive accuracy and Scrambling this week. Good Putting will be required as well.
Zach Johnson
Won here  twice -  in 08 and 09 then MC and hasn't  played Valero since. Btt his stats are off the Hook - and set up real well for this course - #3 in Drive Accuracy - (see PR above).

Jordan Spieth
Is back at Home in Texas this week after a week off to prepare. He missed the cut last year and 44th the year before. Sticking with him for a while longer.

Freddie Jacobson
The "Junk Man" can scramble with the best of them and has a good record at Valero.
3 Top 5s and an 18th in the last 4 years. He is also trending right now - finishing 10th and 20th in the last 2 PGA events.

Summerhays Daniel
Is on the sheet again and was 7th last year - Like him at 80-1 LVH.

Brain Davis
Ranked 5th in Power Ranking But was not on the sheet. Really sucks as 1st time winners are a tradition at Valero. 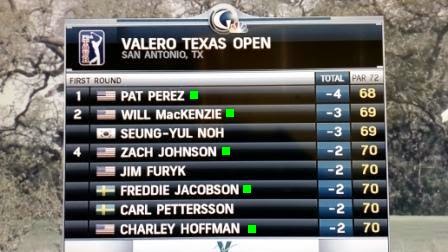 Our Power Ranks
Storm the First Page of Leaderboard!
144 Players in The Field
1st and 2nd / 3 Tied for 4th

Jordan Spieth In Trouble!
He Bogied 6 of the first 9 Holes (+6). He will need a strong 2nd 9 to keep his hopes alive for a chance to compete this weekend  He Birdied 1 (played the back nine first). 5 Over through 12 Holes. 6 to go?

The Comeback KId
Does it again. 6 over heading into the last 9 holes. With the leaders at just around -3.  So he didn't try to get it all back in 9 holes. But he got half - Finishing at just (+3).
If he shoots well tomorrow - could be just 2 or 3 off the lead by Saturday.

Phil Mickelson
Said coming in "He's just practicing to win another Major at the Masters."
What an Ego!  Bet he felt pretty good - several strokes ahead of Spieth on the front 9.
That didn't last. He was 3 Over by the Final Hole. He had a 2 footer for Bogey.
He missed even that Tap In - to Finish 2 behind Spieth (+5).
Maybe you're just practicing, Period, Phil. 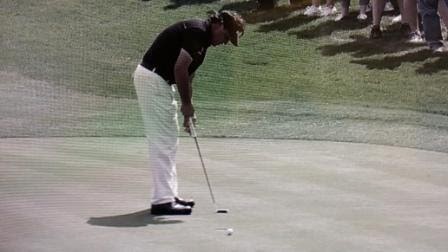 4 Power Ranks on the First Page! 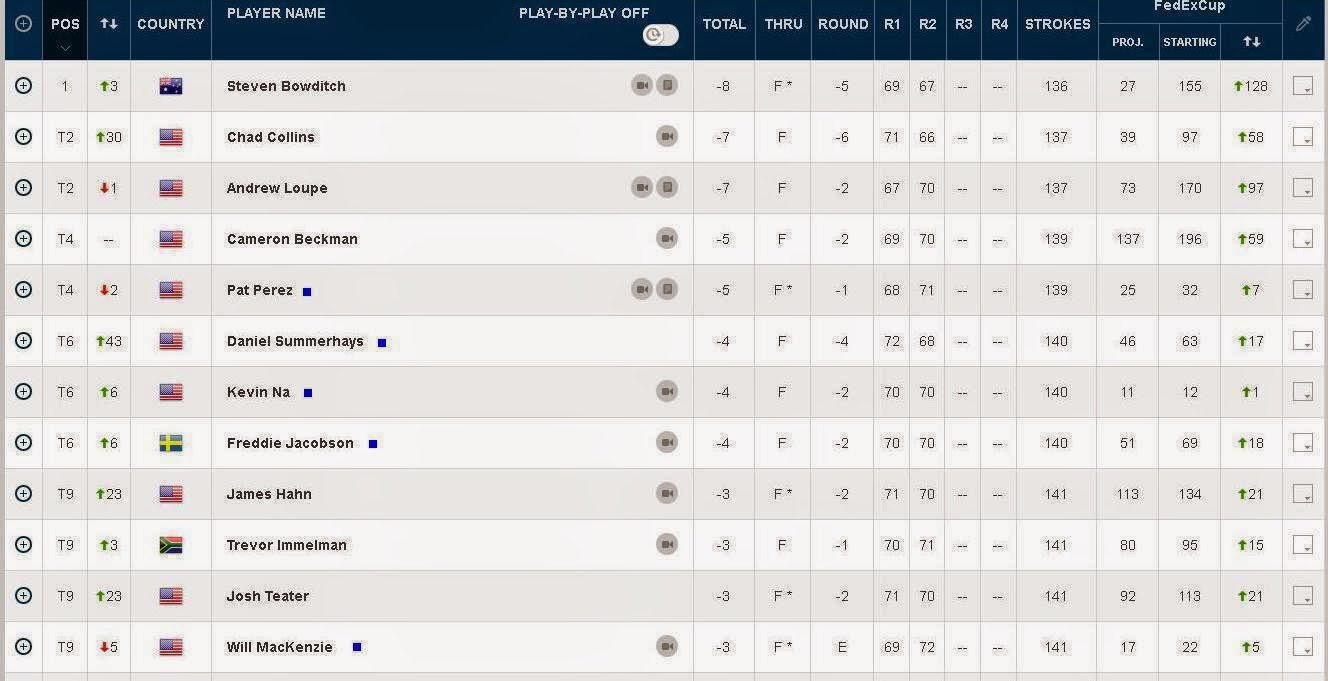 Perez and McKenzie
Put on a Clinic - Sticking One Approach shot after another. It was Fun to Watch for once this year  Real Golf!  What a deal. They were both at (-7) but each fell several strokes by the end of the Round. Unfortunately they - like the rest of the field - watched great shots bounce off or roll down the undulating greens. When will the PGA realize that's not want we want to see?
Luck of The Draw
Jordan Spieth drew the short straw in Tee Times this week. Fog, Delay, Wind and Rain first Round. High Winds and Dry Greens the 2nd. Early Late Tee Time had a great advantage. JOrdan did well to survive into the weekend. 6 Over after Friday. He's just (+1) going into Saturday. Mickelson was lucky to makes it at (3+) - Right on the Cut Line.

House of Cards
The Leaderboard has 4 untested and unfamiliar faces on top. 4 Players with multiple Top 10s are right behind them. Look for a new set of leaders by the Final 9 Holes on Sunday.

EARLY ROUND UPDATES
Bowditch (-11)
Holes 2 Chips on his 1st 2 Holes -  to Extend his Lead!
Seems like a good nice, humble guy - too bad I have to root against him.
Jordan Spieth
Making a move. 3 Under on front 9 (-2).  It would be Miraculous if he came back to steal this one after a 6 Over Start on Friday.  He will need the Leaders to Finish  around (-10) Today - to have a chance. So Yell "Shank! When the Leaders Tee Off.

Our Power Ranks
Kuchar / Perez and Na still on the First Page 3 and 4 back. 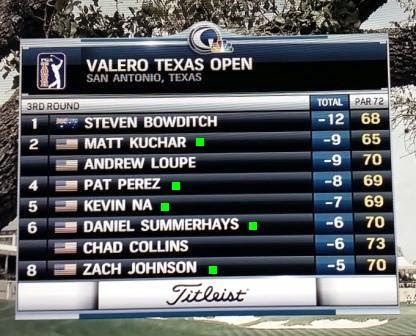 Get Off My Leaderbord!
Until Collins pushed one down - 6 of 8 Names on the First Page were Power Ranks. If the Leader falls - we are ready to Steal This!
Life's Ups and Downs
Have been hard on Steven Bowditch. Over 100 Starts - Only 2 Top10s in his Career.
UP and Downs were his specialty Yesterday. He Missed 11 Fairways and still shot 4 Under.

The Pictures Below illustrate just one of many fantastic saves that kept him on Top. 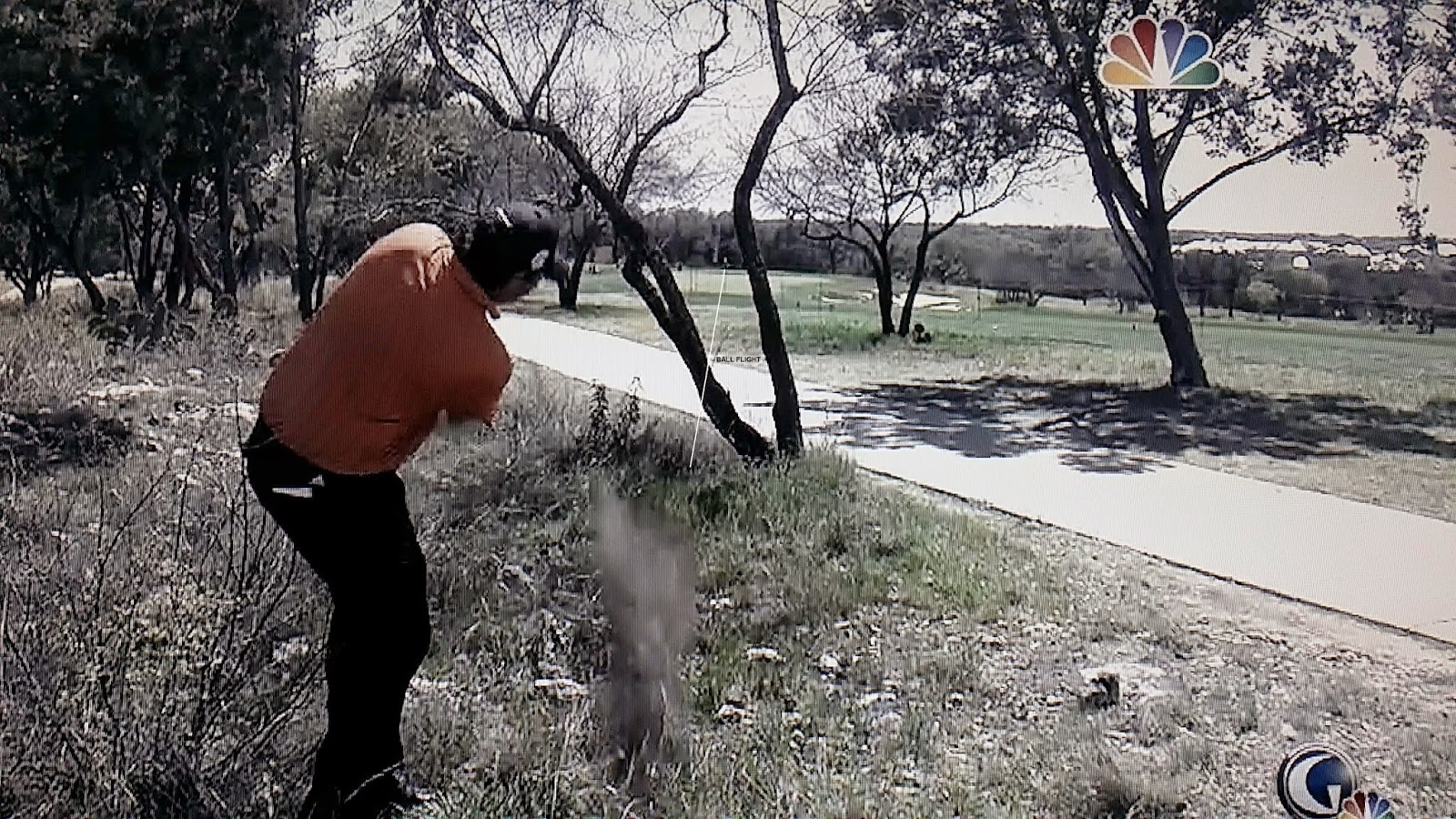 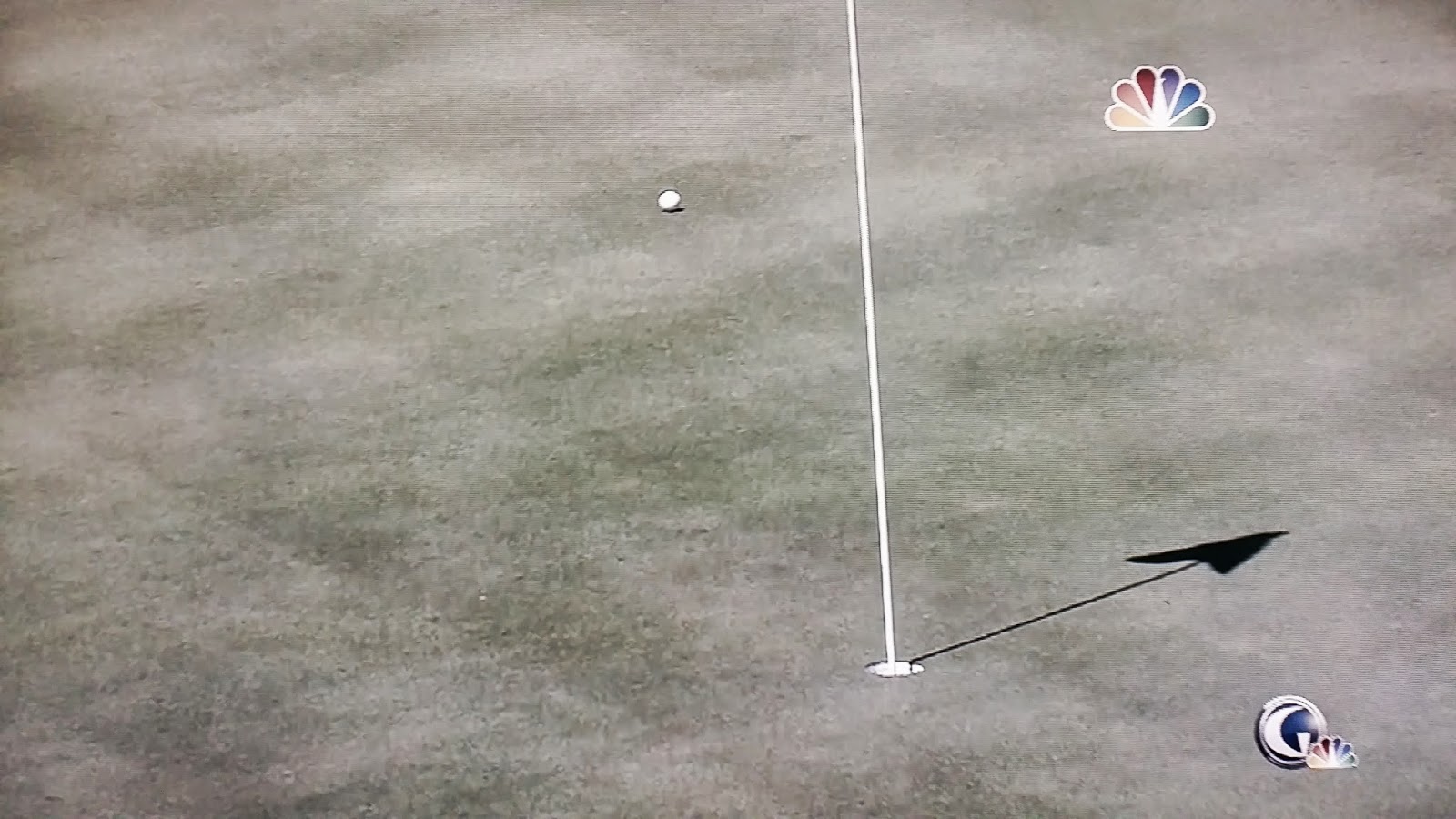 With 3 Rounds in the 60s - He is due for one bad one.
That would the Final Round Make this Anyone's Game.
We'll see? 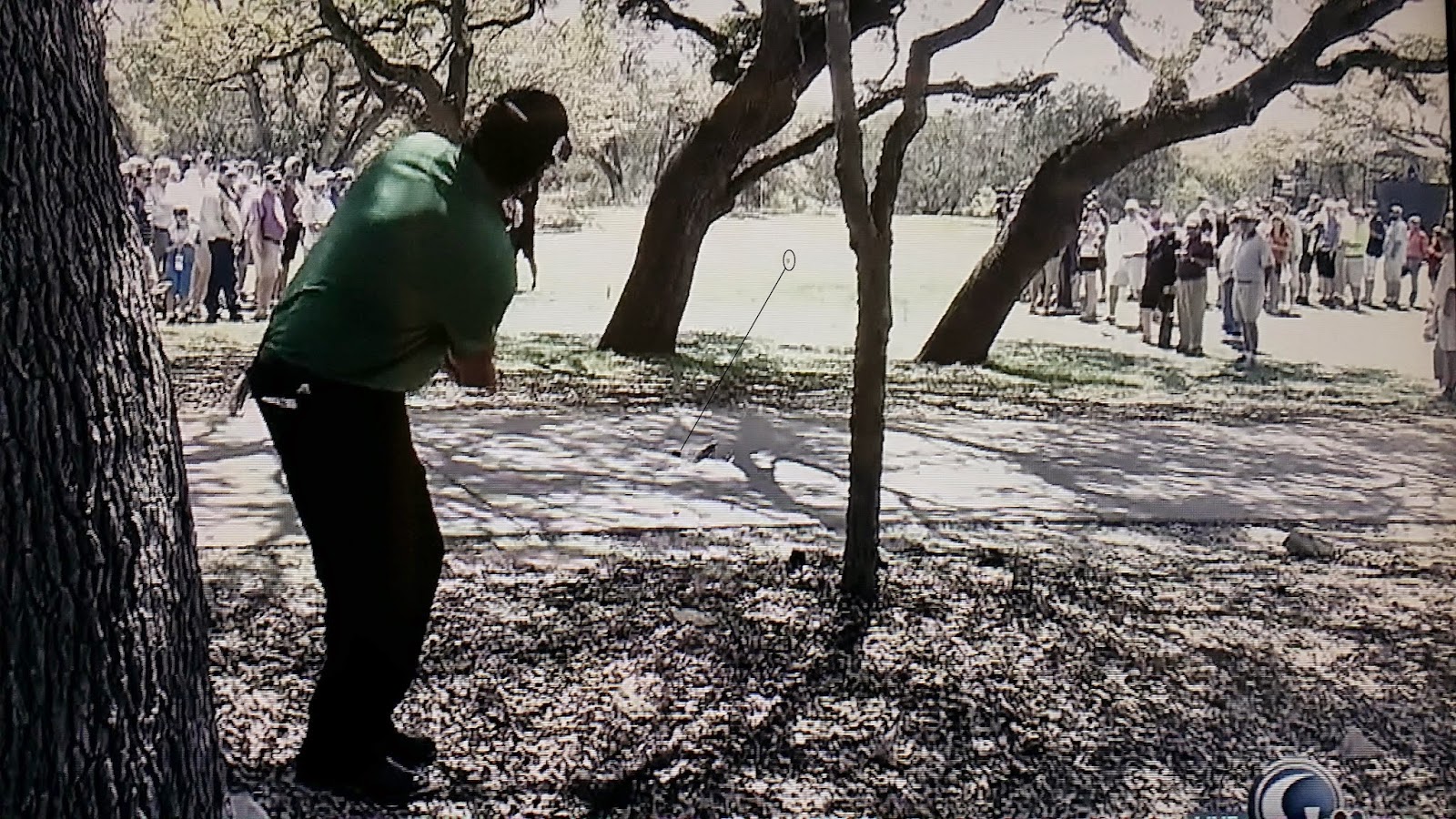 You can only do This so many times
Before it Bites you in the Ass
Ball Rolls Past Green Into Bunker
Double Bogey!

Bowditch In Trouble
He Dropped 3 Strokes on the First 4 Holes. Tied with Power Rank - Matt Kuchar for First (-9)
x
Leaders have Stalled
Around 8 and 9 Under on Front Nine

Bowditch Leading (-10) After 5
Continues to Take the Scenic Route 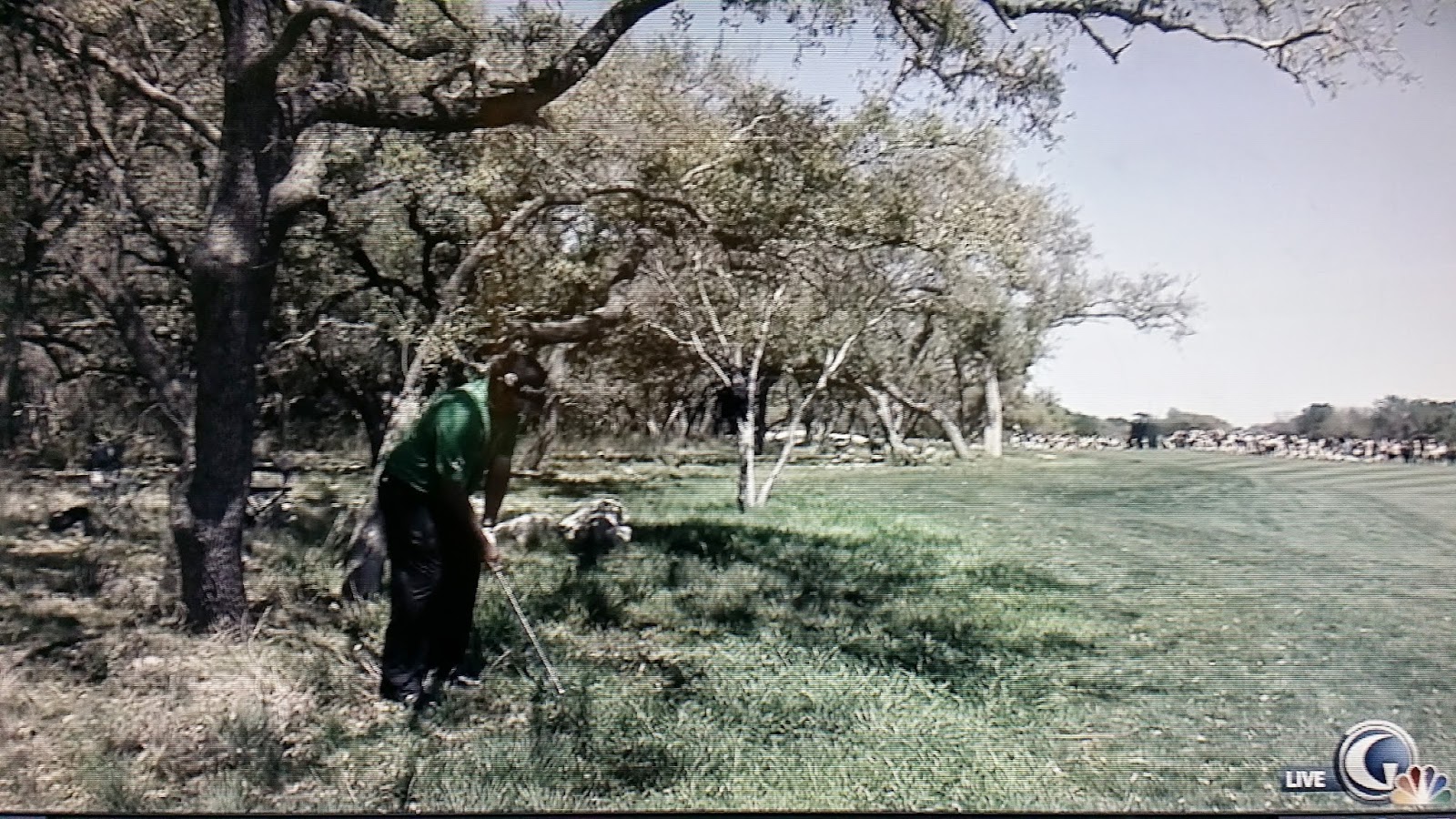 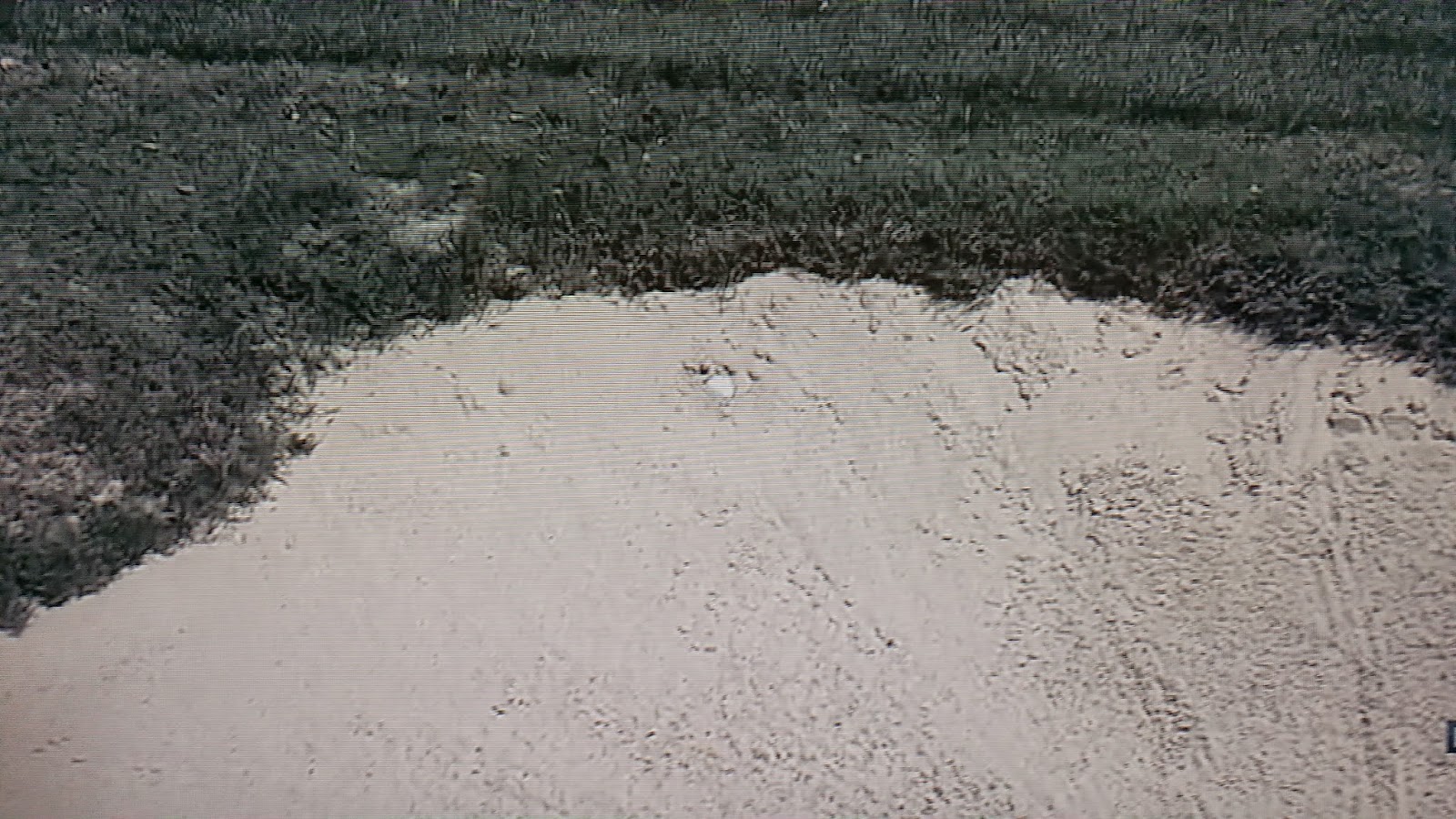 Jordan Spieth
(-5) After 9 - Needs the Leaders to Stall and about 5 More Birdies - would be a Miracle?
He just Missed a 12 footer on 8 and then This Chip (Below) by half an inch! Those 2 missed Birdies would have put him just 2 back. He'll need to Light up the back 9 and Hope the Trouble at the Top Continues. 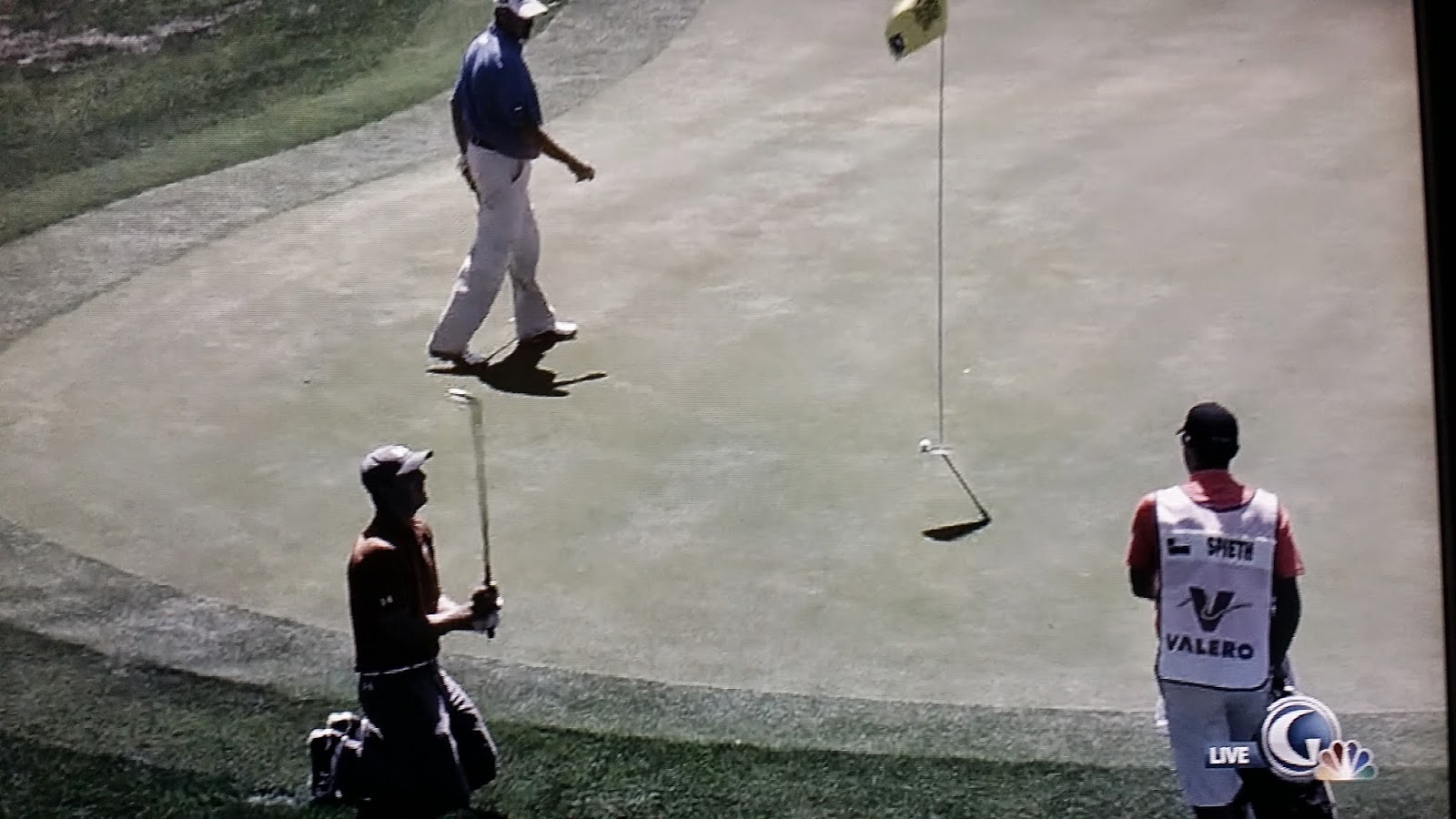 Loupe Falls
Out of the Race with a Double Bogie on 7 (-5). Bowditch (-9) Spinning his Wheels as well.
Kuchar Failing to Take Advantage. SummerHayes (-7) and McKenzie (-6) Gaining Ground.

JUST YOUR AVERAGE SUNDAY FINAL ON THE PGA HE WHO CRASHES LEAST WINS
THIS IS STUPID
PGA!
MAKE THE COURSES PLAYABLE!


Summerhayes
Just Missed and Easy 3 footer for Bogey to Fall Out of Sole 3rd. (-6)

HEADING INTO FINAL BACK 9 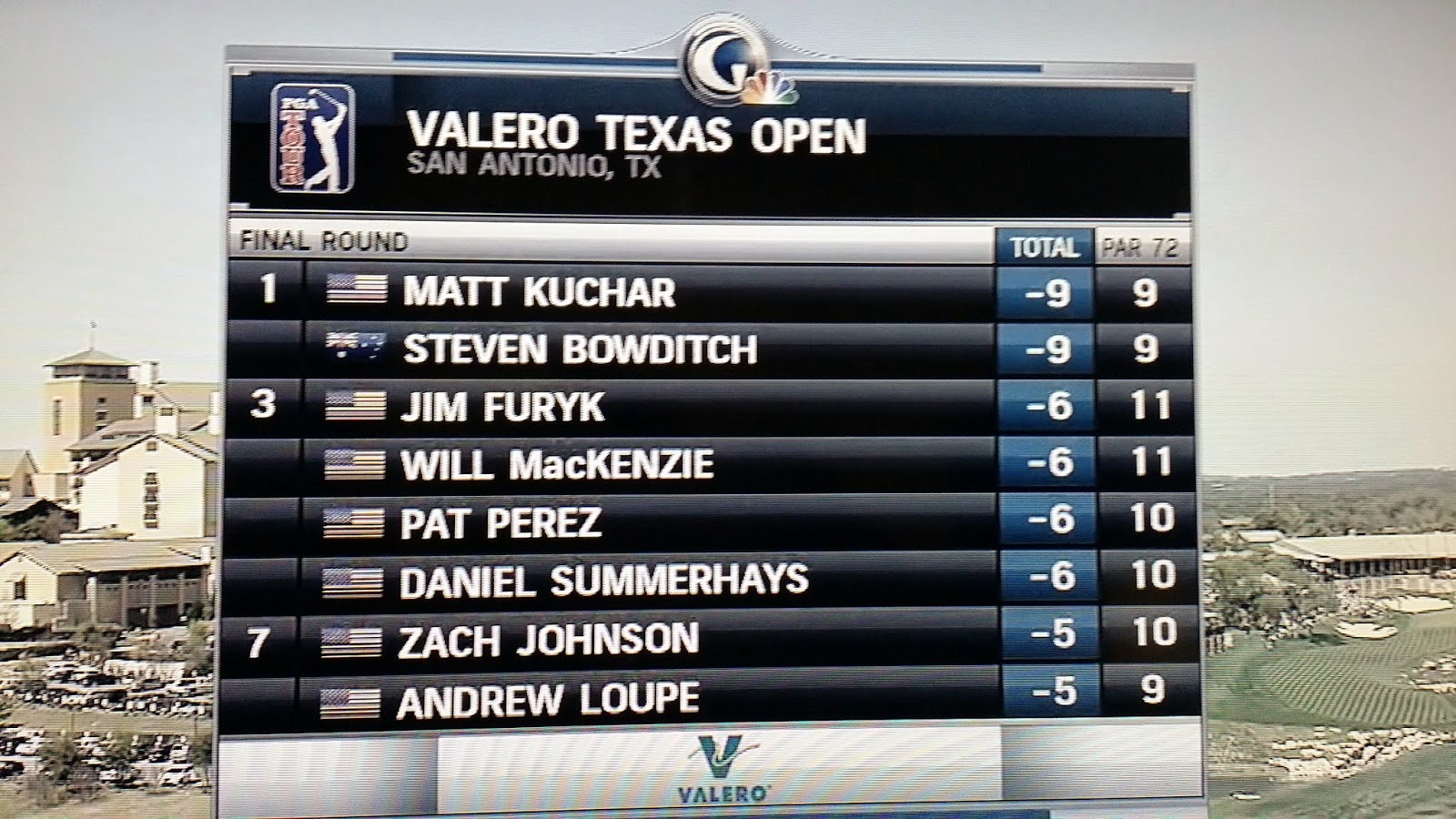 
Bowditch
OK - Off the Rock - Into Official - Back onto Rough. Better Lucky than Good Sometimes.
That Probably Just Saved him The Lead 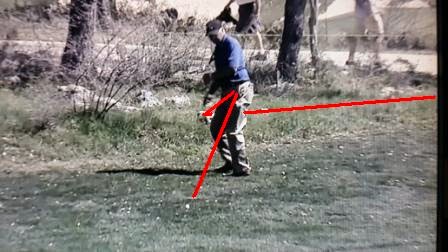 HERE'S WHATS WRONG WITH THE PGA 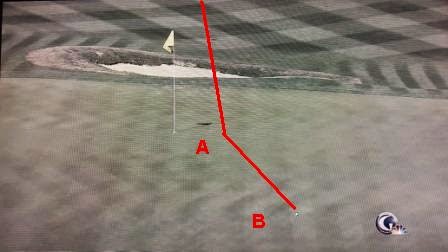 That Far from Being Over!
With a 2 Shot Lead - And Just 7 Holes Left -
Bowditch (-9) Puts for Birdie and it Stops a half turn from Going In. 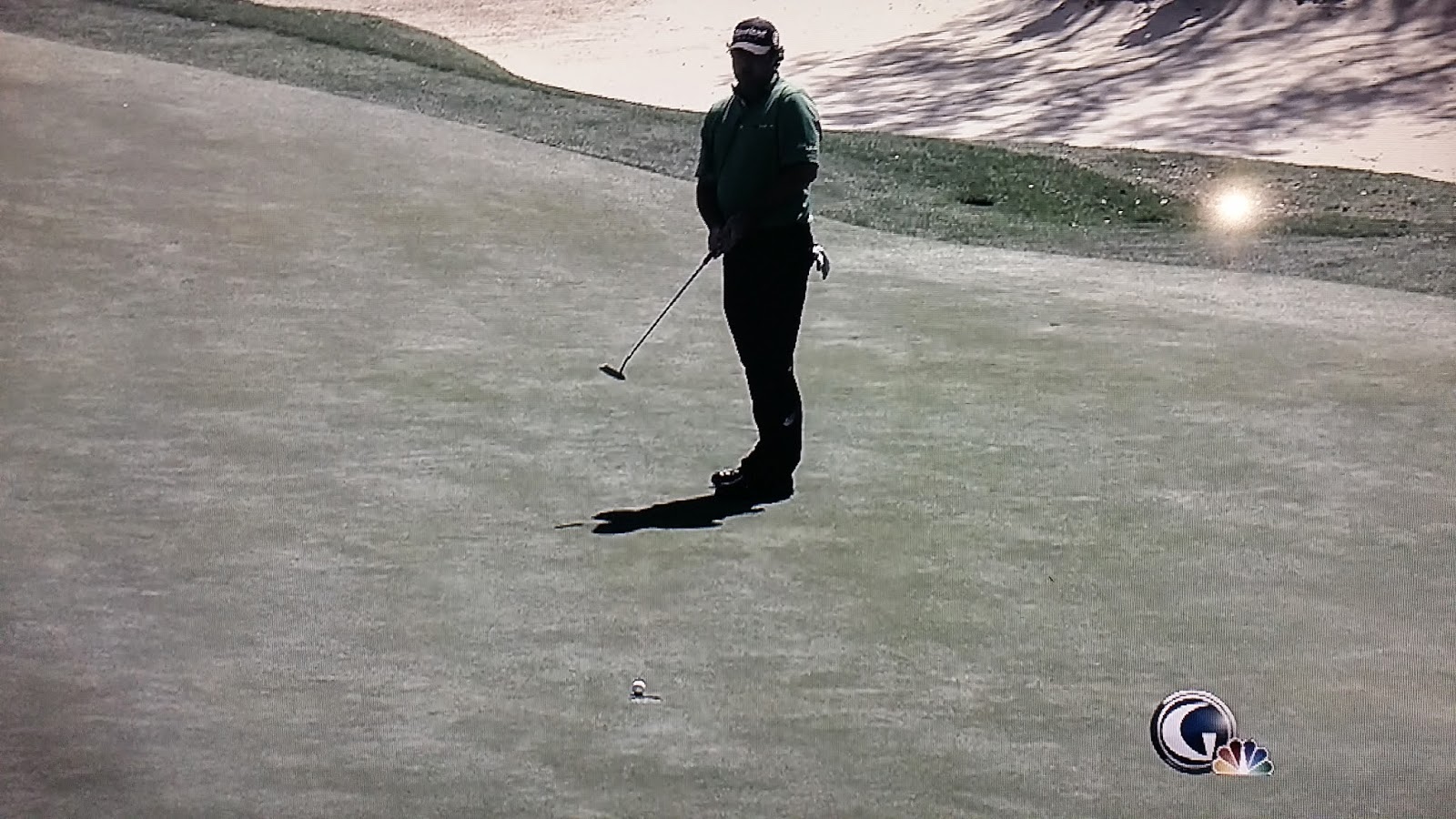 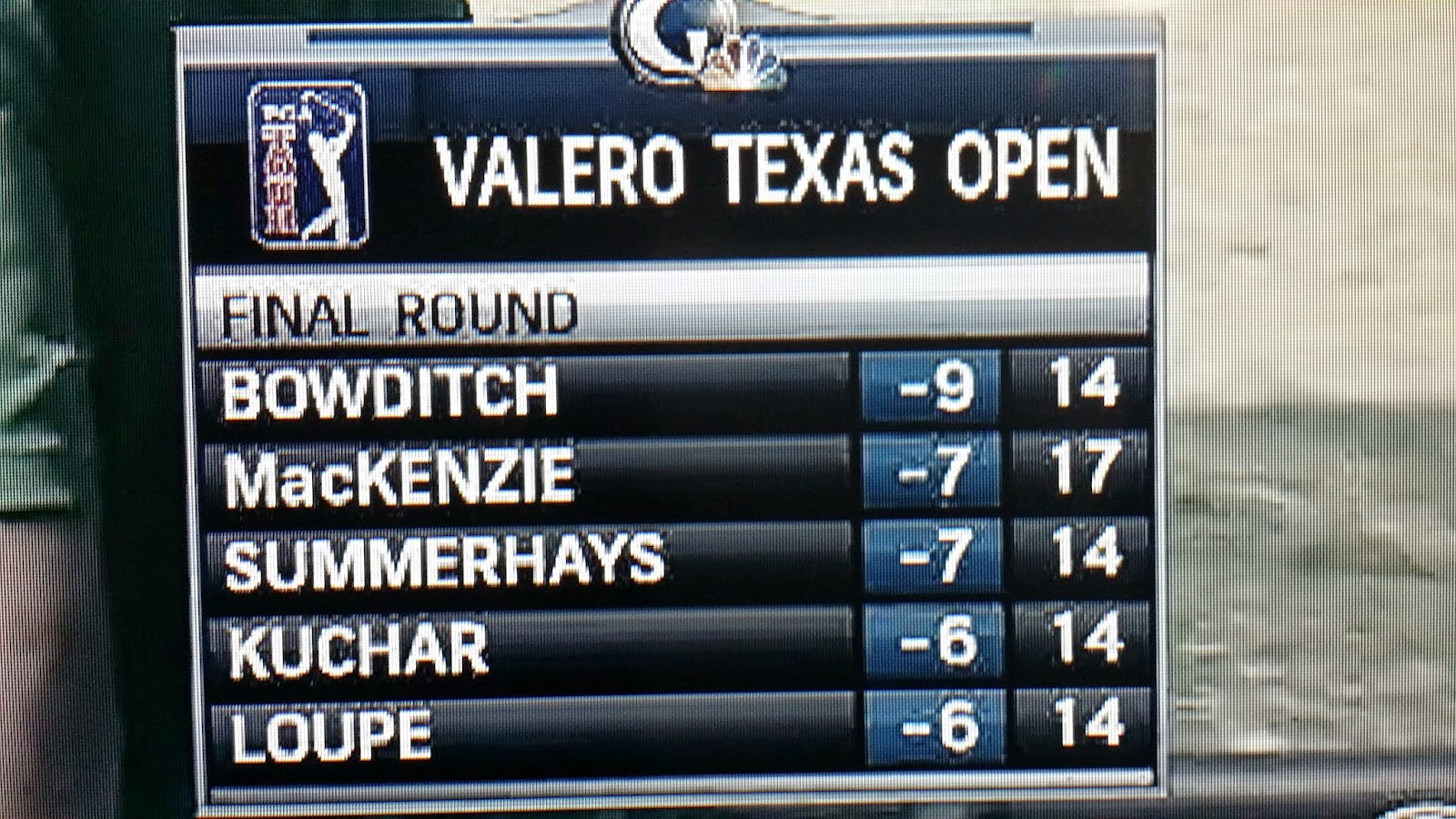 Bowditch Laying Low
Waiting to Tee Off on 16 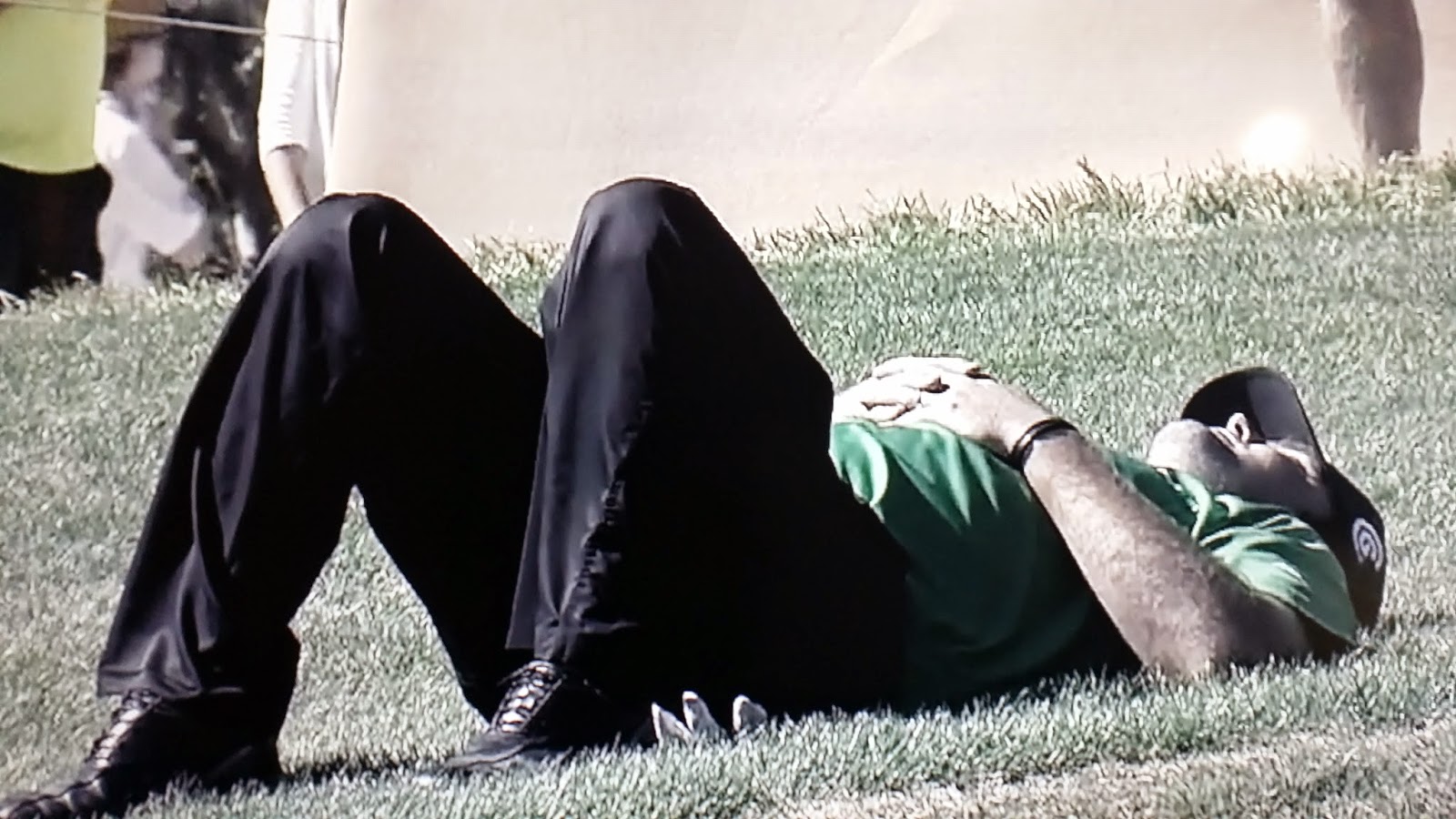 The Sponsors will have "Helmet Day" on Sunday next year.
Bobby Jones just rolled over in his grave.

MacKenzie
Leader In The Clubhouse (-7)

Bowditch
(-9) On 17th - Spectator Yells during his Backswing. Stops Resets.
Pushes it Right! Through Cart Path into Dirt.
Another Good Save - On the Green 35 Feet for Birdie?
(2 Shot Lead) Should be Easy 2 Put unless he get the "Yips".

Bowditch
On the Tee - PAR 5 18th
6 Shots to Win.
PUSHES IT WAY LEFT! Left of Rough in cabbage just short of desert. 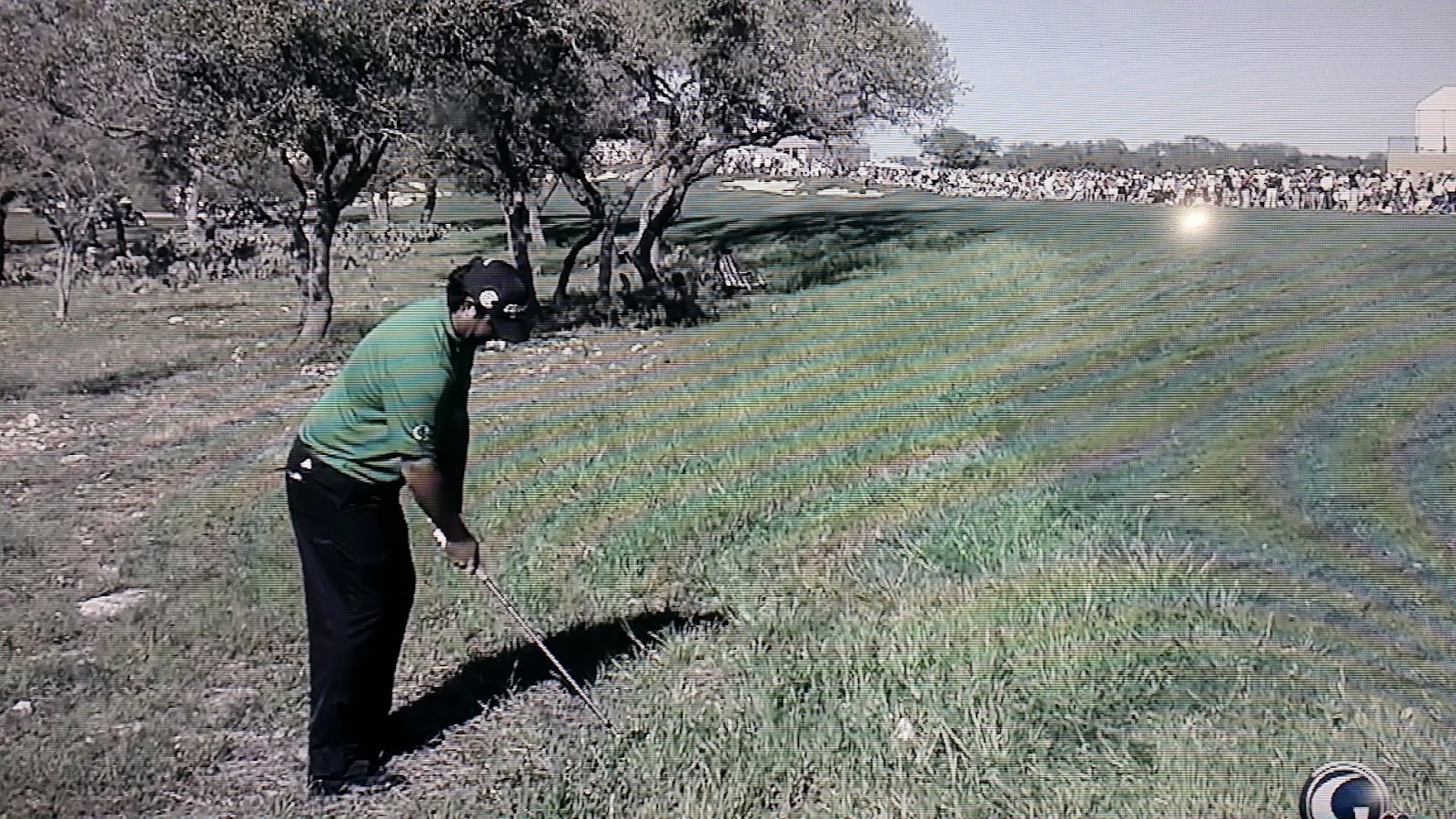 Lands In the Fairway

Oh Great, They just explained the guy has suffered from depression for years.
Now I can't even yell shank. For real. Feel bad Rooting against him. If he blows this - can't be good for depression.

Well, He just landed on the Green with his 3rd shot. So unless he 4 puts from 50 feet - he's safe. I - on the other hand - may Buy a Gun and Slit My Wrist. 2 Power Ranks in the Clubhouse with the lead. Hey - Good for him. Not Over yet though. Kuchar still has an Approach shot for Eagle from a crap lie in the Rough - OK pretty Much Over.

WOW! Kuchar almost hits the Pin! But bounces off green into Rough.

Bowditch Puts to Inside 3 Feet. WOW! Lips Out! Pushes in.

Bowditch Wins
Good for Him! 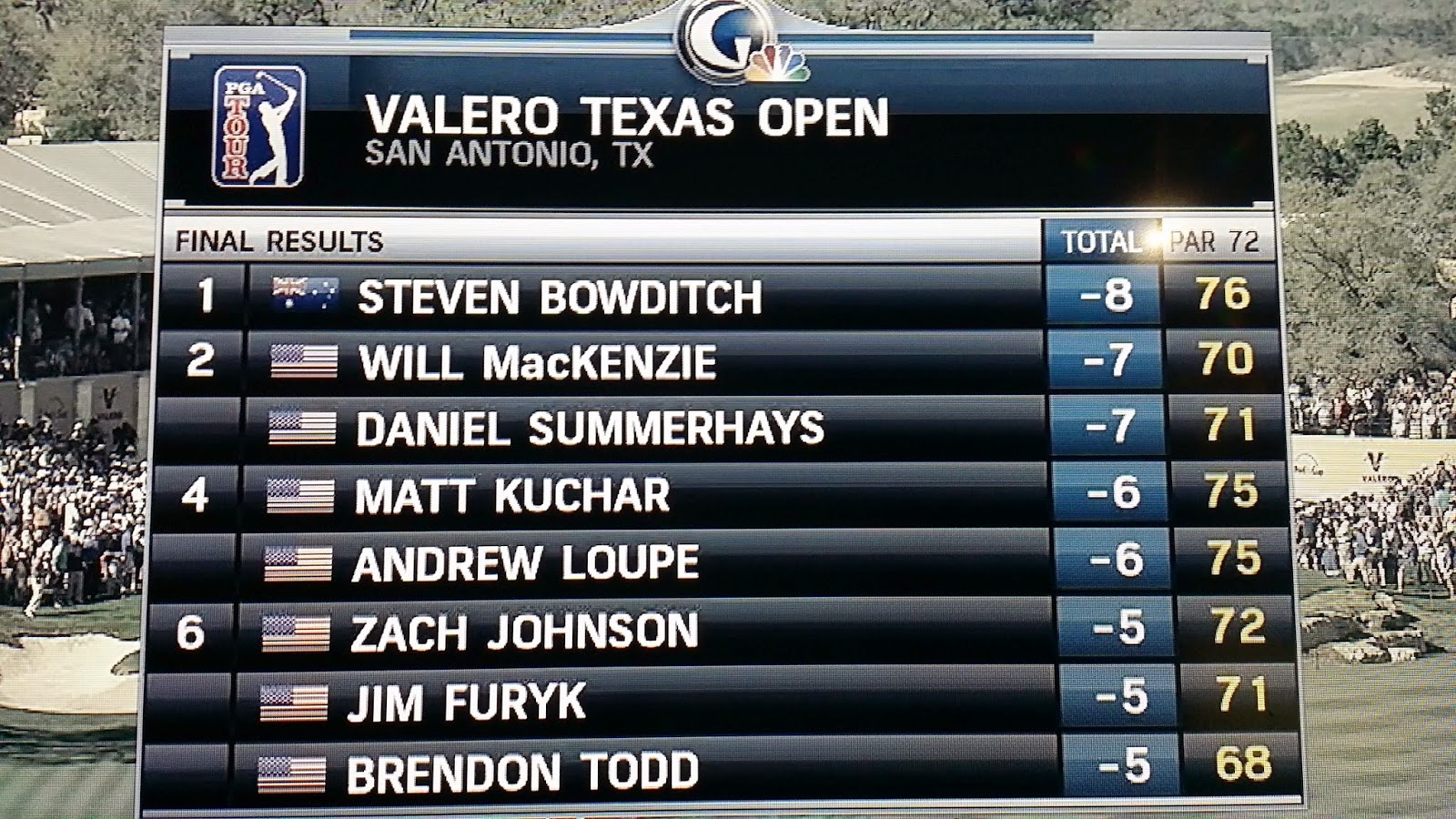 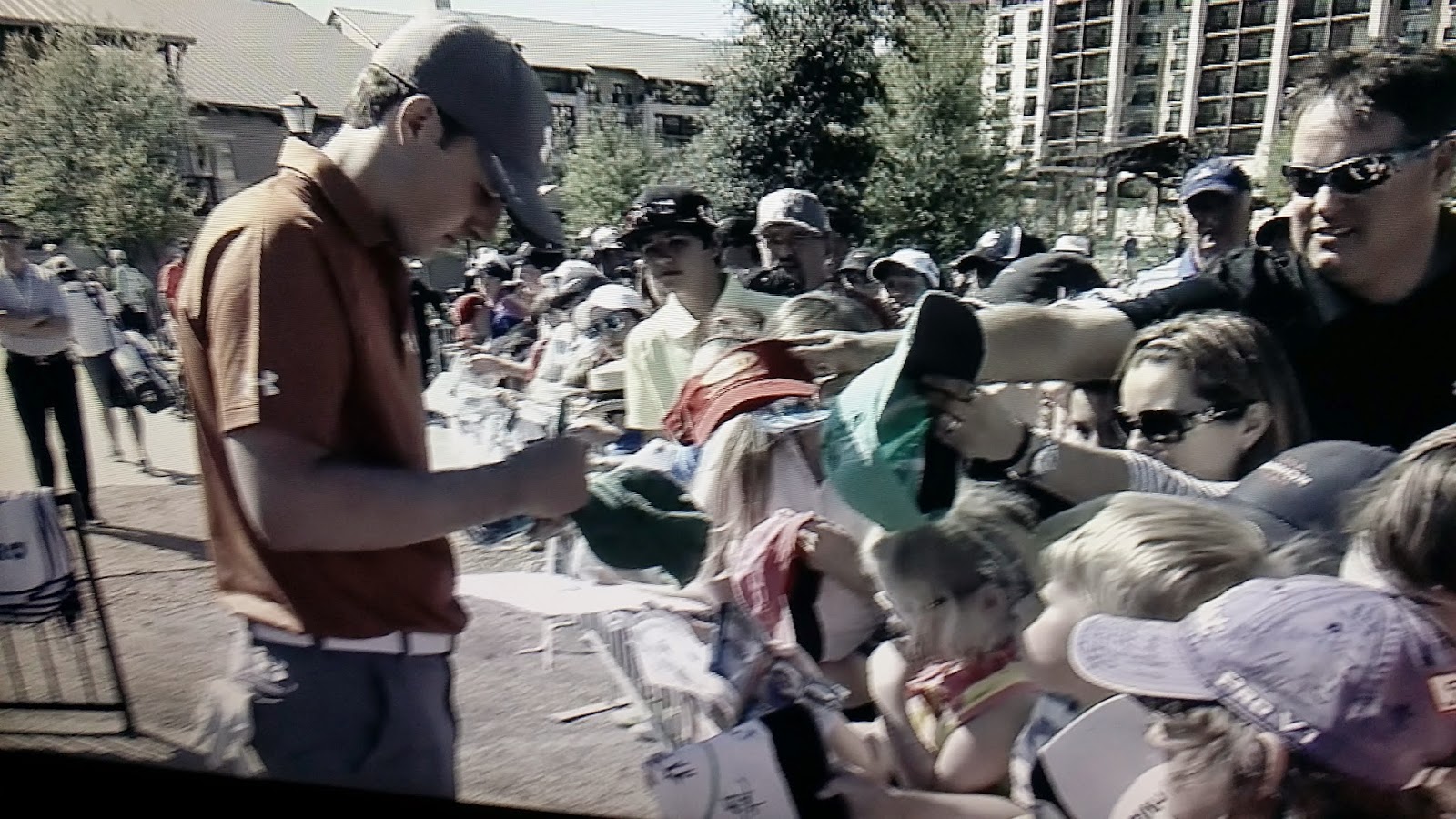