No Bill Murray
This was going to be an article insisting anyone new to golf - watch the Pro AM this week at Pebble. It starts Thursday during regular play - most Pro Ams are on Wednesday before the tourney. To be Honest - Murray was the only thing ever worth watching - at any Pro Am. He is off promoting "Monuments Men". Looks like a stinker and so does the Pro Am at Pebble now.  Enjoy the Professional Golf.

Surfer Kelly Slater did Tee Off first with the media - stating that "Golf is a game - not a sport." Interviewed Kelly at The Wedge in Newport Beach just after he shredded a 30 foot monster on Boogie Board. Those waves break in shallow water just 20 feet from the beach. Good Guy. He's right. One look at the physique of last weeks winner and it's hard to argue. Anything you play in Dress Slacks or Pajamas is not a sport. Golf and Baseball are games. He mentioned it was a great game. Failed to mention it is also the most difficult game on the planet.

This Weeks Odds and Picks 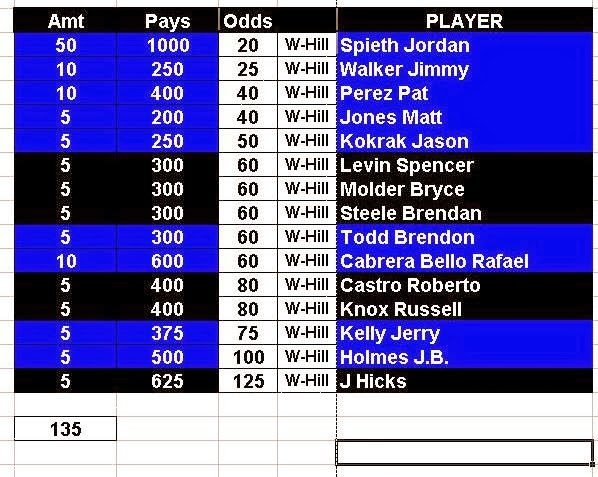 Go Jordan!
Pebble consists of 3 courses in order of difficulty. The Hardest (SH) Spyglass Hill. then (PB) Pebble Beach and the Easiest (MP) Monterrey Peninsula. All of the 1st day leaders came out of (PB) or (MP) with Rookie Loupe leader for a day @ -8. Jimmy Walker T2 @-6. Keep an Eye on Brian Davis - He was close a lot last year and is way overdue for a win this year.   Jordan Spieth had the low round on the treacherous (SH) course @ -5.  A magnificent start for Spieth, who will now play one of the Easier courses. Weather is expected to be a factor. A 40% Chance of rain by Noon Today  - But winds only 5-10 MPH. 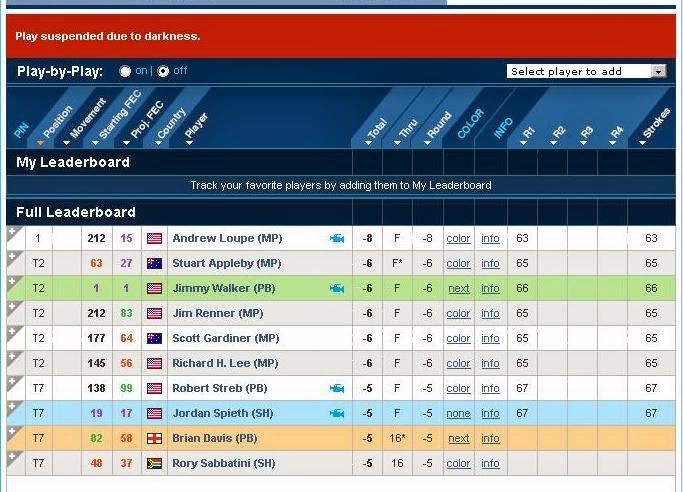 SnorFest
Yesterday was the worst coverage I have ever seen. There was a 3 hour rain delay - but that was not the problem. Without Bill Murray for comic relief - they needed to step up. They do have Peyton Manning and Tom Brady along with Bill Belichick. But the idiots at Golf Chanel did not follow any of their rounds. We were treated to about 5 minutes of highlights showing the NFL Stars. The other, unwatchable 3 hours - consisted of old corporate tools who couldn't pay their own families to watch them play.

Programing Disaster
Then to add insult to injury - the 330pm coverage started. After the 3 hour delay - by 3:30pm Half the field was just rounding the back 9. So when I saw the coverage was going to continue - I was stoked. Then I realized they were replaying the same unwatchable morning disaster I had just endured.

The Pig has Landed
If you tuned in early to see players warming up at Pebble - you were disappointed. Instead - We were treated to several hours of Racist Pig and Environmental Criminal - Donald Trump, and his spawn - opening the refurbished Doral course. He landed in his private helicopter and was greeted by the brown nosing Golf Chanel staff. I lost respect for Rocco Mediate - who was all smiles playing with that jerk.


Thanks Golf Channel!
You always do your best
to make me wanna hate
a game I love.

Tiger woods declined an invitation to Trumps New Years Eve Party.  I guess Trump figured all black people look alike - so he just hired another black guy who looks like him. Golf Channel had Given Trump his own show. I believe Arnold Palmer owned GC then. That's where I originally saw video of the disgusting charade. NBC later purchased the Channel. What you can't tell from the photo - is the guy really looks nothing like woods up close.
This all happened around the same time Trump was questioning Obama's Birth Certificate.

All's Well that Ends Well?
After a few nasty emails (which I'm sure had no effect) - Golf Channel did show Peyton Manning shoot a pretty decent round. He is just south of Seattle - but the crowd noise didn't bother him. He sucked up what had to be a bitter loss at the big game and signed autographs between every hole.

A Little Tense
Golf channel followed Manning - but didn't bother to follow Jordan's round although he led most of the day. So, all we had was the leaderboard to follow. With all the Ams in the field - it takes for ever to finish and seemed like he was standing still on the back nine. His scorecard reflects just the opposite. Spieth Mirrored his performance on the front nine - opening with 3 birdies and finishing with a Bogie on the back to Finish Tied for the Lead with our other pick Jimmy Walker at (-9).

Shot at $2000 - $100 @ 20-1
Pebble is far from over. However, concerns over Spieth Stalling on the easier (MP) course yesterday were put to rest. The condition's were cold an wet making Monterrey Peninsula a little more than a walk in the park. He handled it with the patience of a seasoned veteran to stay tied for the lead with Walker. He has a chance to pull off his second win on Sunday - 3 months younger than Tiger - when he got his 2nd.  If he does - and you are watching Sunday - Know this - I will be yelling louder than I did during the Superbowl - and I called Seattle by 14.

They Call the 3rd - Mariah
Play has been suspended Due to 35 MPH winds.
Tune to CBS for Noon Coverage - hopefully it will Resume.
Wind should decrease and Rain should start.
Not cashing my tickets yet - But haven't lost faith either - . Go Jordan!
Play expected to Resume in about 45 minute around 1:30 (PST)
A Host of Celebrities trying to entertain us the meantime

Not sure if this is good or bad for Spieth. He opened with a Bogie - not playing bad - just missed a 10 foot put and another to miss a Birdie on the Par 5 2nd. You have to birdie the Par 5s if you expect to win. He started tied for the lead with Walker at (-9). Walker (-10) and Mahan also (-8) have an advantage on the easier (MP) course. Jordan T2 (-8) is on (PB) - the Coastal course - making the wind a bigger disadvantage to him that his two closest competitors on the inland (MP) course.

Normally a fresh start after a Bogie is good. However, the wind was probably keeping Walker and Mahan from taking a bigger lead too. This is a big test for Spieth or any golfer. If he can hold serve with that kind of Course and Wind disadvantage - well...let's just say- this is the stuff legends are made of.

CBS Ended Coveage - Jerks!
Golf Channel (Not a CBS Affiliate) showing repeat of Morning Round. Idiots!
Play will end soon and they'll finish the 3rd round in morning.
Spieth was enjoying his am partner and the experience. Dropped 4 shots in the process - T7 Now (at -5) Walker 6 stroke lead on him and 4 on Summerhayes T2. (-7) - been trying to bet Summerhayes for weeks -never available at the books.

Jordan's lucky in a way. Took all day to play 9 holes. Could have been 18 down the tube before he woke up and got serious. In his defense - if you hate slow play - you can sympathize - 3 hour delay, plus waiting on Ams to finish holes could distract anyone. Lot of time standing around with press everywhere, and wind and rain. Understandable - but now it's time to ignore the amateurs and win a tournament. Needs to put blinders on and shred the back 9. But hey - he's only 20 - not giving up on you kid - get it back! You can do it!

Painful Rituals
In the Amazon Jungle - young men coming of age are covered in Bullet ants and must endure the pain to become a man. In America - Young men on the PGA tour play coastal courses in bad weather. Jordan Spieth could have skipped Torre and Pebble and picked up an easy win somewhere else this season. He's not that kind of guy. He wants to be number on in the world the world - the old fashioned way - by earning it - On every course in every condition. He prefers and enjoys it that way. He was bitten in the final round at Torre and badly stung, multiple times yesterday, in the 3rd round of Pebble.

I said that Spieth was at a great disadvantage going into round 3. Playing on a coastal course - exposed to the wind. Playing a difficult course as his co-leader Jimmy Walker played the easier (MP) course. The stuff legends are made of if he pulls it off. So, not puling it off doesn't make him a bum either. I predicted last year that he would be Marque player by the end of the year. He has. I'll say now that he will be world number 1 by sometime next year. I will continue to bet on him at every opportunity. Perhaps at better Odds next week - Depending on how he finishes the final round.

Spieth Final Round. Jordan stopped the bleeding quickly in the final round - opening with an Eagle on the 2nd. He did not light up the front 9 - but finished with a birdie on 9 to go 6 under.
As nice ads a a miracle finish would have been - the real goal for Spieth was to right the ship for Northern Trust next week. Walkers short game is so good this tourney - not much of a chance for him to tank anyway. Spieth went on to patiently birdie 16 and 18 to finish in an 8 Under tie. Crazy when you are dissapointe about a 20 year old taking 2nd in one of the hardest tourneys of the year.

I know a lot of you are suffering in bad weather and wouldn't dream of passing up a sunny day of golf right now. So, I wont either. Gonna go play 9 at the local Par 3 and come back. I will call the final holes from my DVR in a couple hours.


WALKER WINS!
#3 for Him this Season 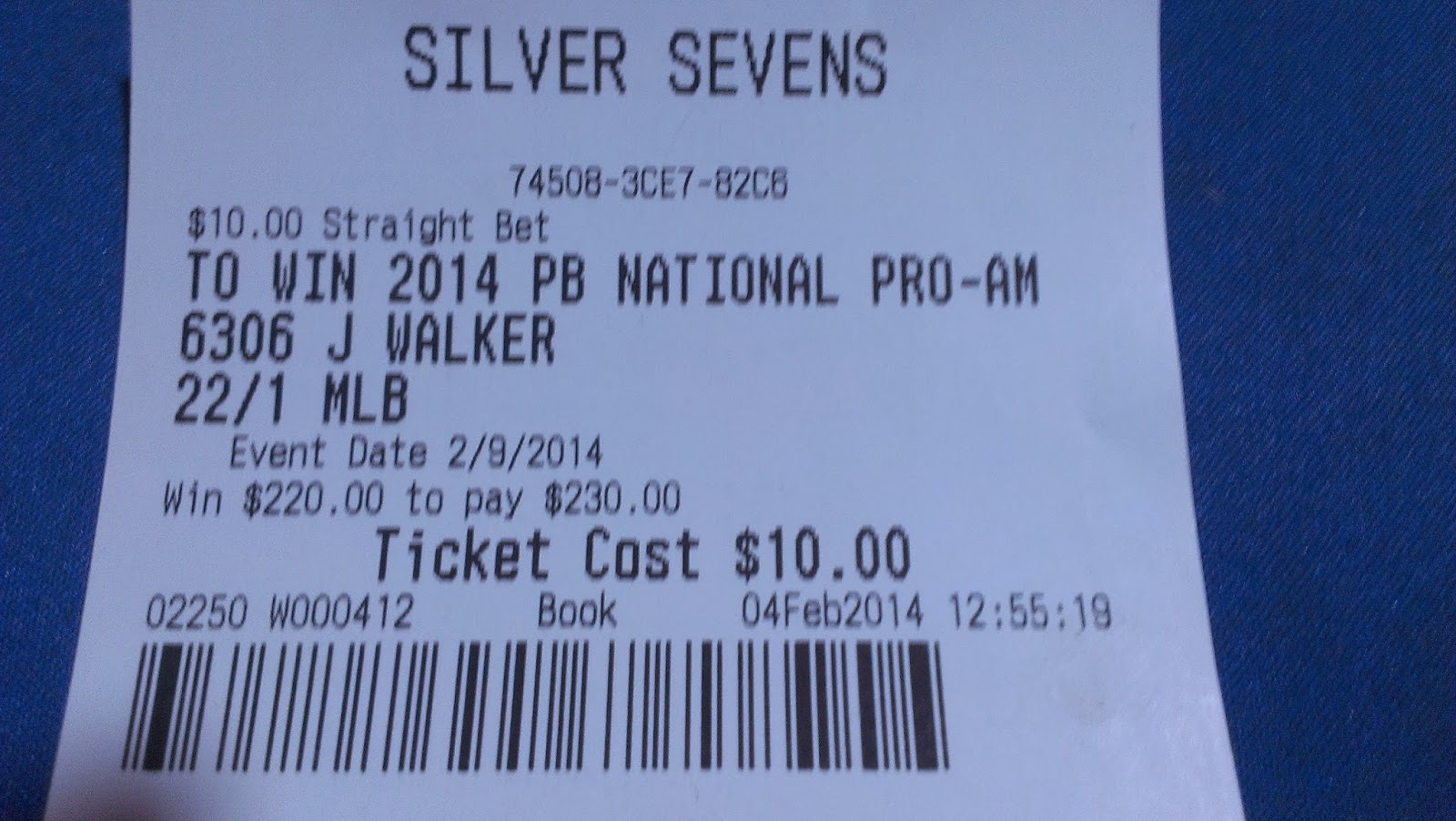 Re: Jordan Spieth
He played the 2nd worst Round of his PGA Career and Finished with the 3rd lowest score. What does that tell you about his chances the next few weeks?
$100 of the Walker win is going right back on him. 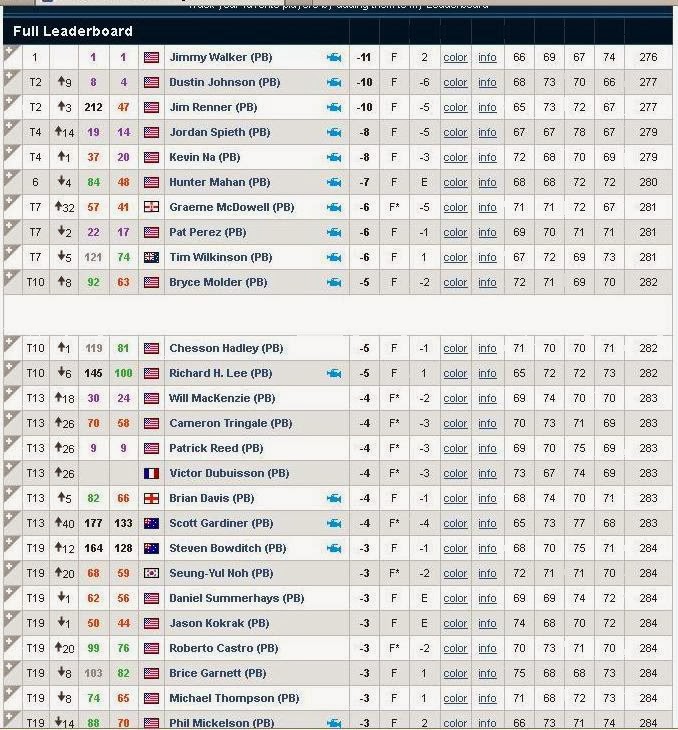