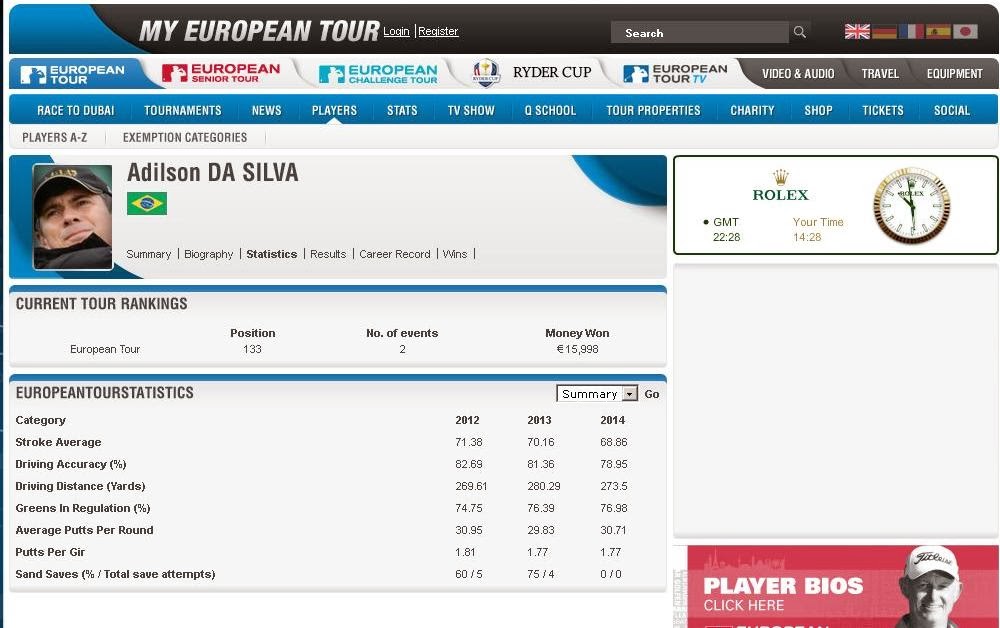 LVH had very few players on the bet sheet this week - so I placed bets at William Hill. Lower odds on some - but more players and some good long shots.


Not Gonna Double up on them at those Odds.


Steve Webster is my Favorite this week.

This Weeks Odds and Picks 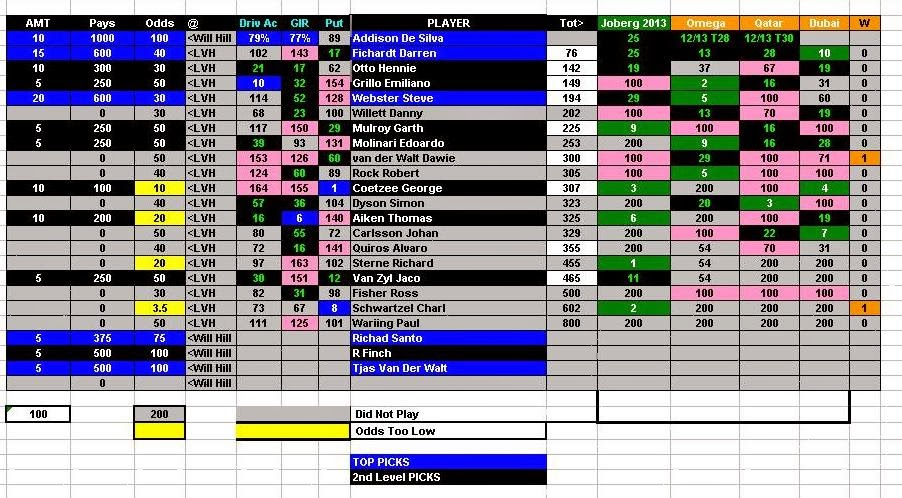 
De Silva on the Cut Line...
GC airs Euro tourneys Tape Delayed -early morning - like 4am. So, Like all golf - I DVR it. About a half hour before Morning Drive cut away to the tourney - the jack asses at Golf Channel showed the score. Way to go Dip Sh_ts. So I knew Molinari holds the lead at (-11) and I didn't see Addison De Silva anywhere on the leaderboard.

I was not gonna watch it and just check the score online. Then I thought - what the hell, fast forward - see if you see De Silva. Sure enough - near the end - there he was. Black shirt, the older chiseled face Brazilian was in the fairway. He looks like a bull fighter, or the star of a Spanish Novela. The cut line was high today at -4. He was -3 with 180 yds to go on his approach to the par 4 on the 17th hole. I yelled "Stick it!  He did.

Names to Watch
My cover Coetzee (-10) and David Horsey (-10) fighting for the lead.  Danny Willett (-9) and Thomas Aiken (-8) along with Bourdy (-8) hangin around the leaderboard again. Prohibitive favorites Otto (-7) and last weeks standout Grillo (-6) still right in the mix.


Kill or Be Killed
The leaders killed it on day 3 - scoring between 6 and 9 under. Local Thomas Aiken and Justin Walter share the lead at (-17). (Our Picks) Aiken (-17) and maybe Coetzee (-13) were good covers at 20 and 10-1. The good news - with perfect weather expected tomorrow, is that a 5 or 6 stroke swing is possible at the top. The bad news - that leaves only 8 players with any hope of pulling off a win. Of those 8 - we do still have a 3rd horse left in the race - early leader Molinari at (-11) 6 strokes back. He didn't shoot badly today - but Par was a death sentence for most after today's scoring frenzy.

De Silva shot a disappointing Par - taking him completely our of the running at (-5). He did finish 1 stroke better than Schwartzel (-4). So my business partner Michael Lawrence -wins the argument that he won't bet anyone that hasn't played in a while. That was the case with Schwartzel and De Silva. I will still bet De Silva -anytime he surfaces on a bet sheet.

The Field has shown it's Hand
The other good news - is that familiar names are biting the hook for a win every week. With 2 South African Tourneys left (African Open / Tshwane) - we should be able to pick another winner at one of the last two Sunshine Tour stops. I will be posting and updated Report Card on how each has fared in the last 4 or 5 Tourneys.


Reversal of Fortune
Aiken and Walters (-17) were alone at the top at the end of round 3. Korean Hopeful Joeng was a few stokes back. All three fell and fell hard. Goerge Coetzee on the other hand - ate away at his deficit making long puts and paring the rest to shoot 6 under and take the sole lead at (-18).
The previous leaders all had the opportunity to retake he lead - Even late in the round - but none could make a put to save their lives.
Bitter Win
For me not George. You study stats and find an unknown player you think can win. You mention their name and people say who? I get Coetzee for 2 years off and on. He finally got his first win yesterday. I made nothing. His pregame stats were horrible. He ranked well below 150 in Drive accuracy and GIR (see chart above). Combine that with him going off at Tiger Woods like odds (10-1) and you can see why I made nothing on his win. I did pick him and hope someone with deeper pockets than I cashed a nice ticket this week.
Lesson Learned
What made Coetzee a good pick was his Recent finish (4th at Dubai)play and history at that tourney (3rd last year). Stats should be thrid in priortiy of picking a winner. 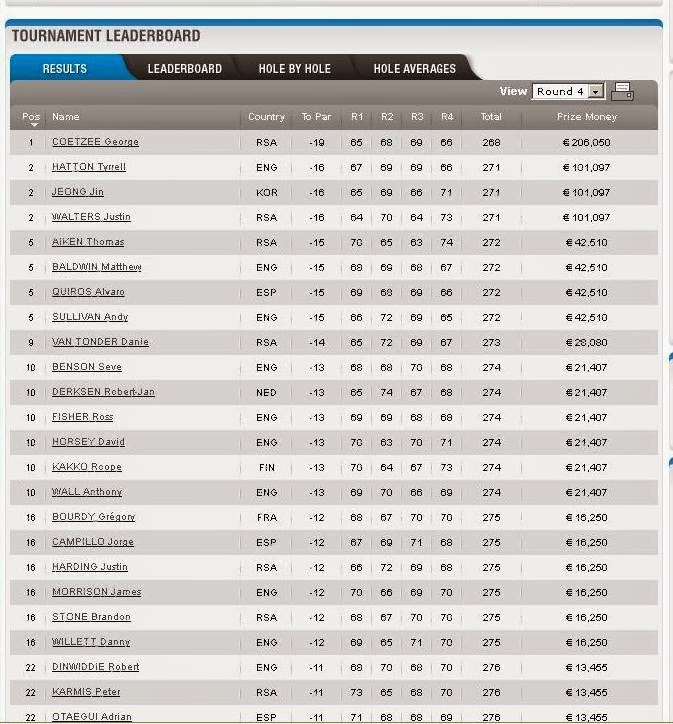