Course
Here's the deal at Riviera this week. The Rough is Unforgiving - So Drive Accuracy and Scrambling from the Rough is Key. They'll need Good GIR and Putting Too.
Weather - Sunny 70s, Calm wind.

Jordan Spieth
Sticking with Spieth.  Wish he could just play a normal course for some Easy Money.  Torre, Pebble and Now Riviera -is no alkin the park. Jordan skipped Northern Trust last year and missed the cut the year before. The good news - Spieth is 2nd in Saves from the Rough. He also helped his teammates Win the NCAA Championships at Riviera in 2012.  He has a 2nd, 19th, and 4th, in that order so far this year.

Bombers
With good weather expected - I do not expect the Fairways to play that short. But - if they do a few Bombers - Kokrak, Piercy, and Garrigus are worth $5 at good odds.

OverRated Favorties
Dustin Johnson  was hot last week - but is 97th in Driving Accuracy, 144th our of the Rough and missed the cut at Northern last year. Not what I call a good Value at 12-1. Justin Rose and Charles Schwartzel haven't played a single round this year. Rose did not play Riviera last year - Schwartzeldid did and finished 3rd Last year - but just came off a 59th in an easy field last week on his home turf at Joberg in South Africa.

Online Books
Really Pissing Me Off that None of the Local Books Offer Brian Davis or Daniel Summerhayes. Hope we can bet them before they win one. Sang Moon Bae - 8th last year - also Spencer Levine who looks like he's on the comeback trail - not available at the Books either. I'm in Vegas - Harder to Bet online. If you can - use and Online Book Like William Hill (Online). I think you can bet anyone in the Field that way. 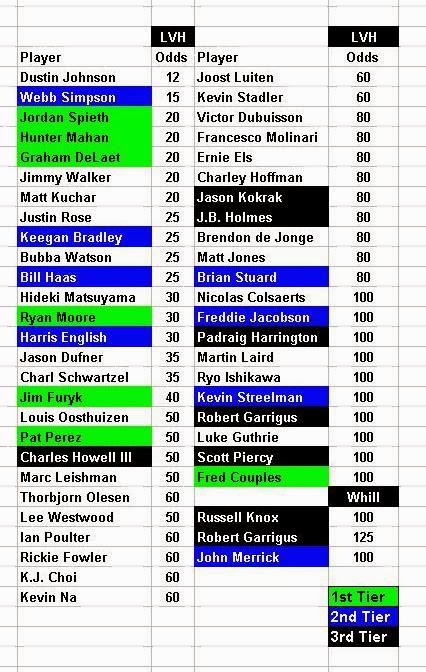 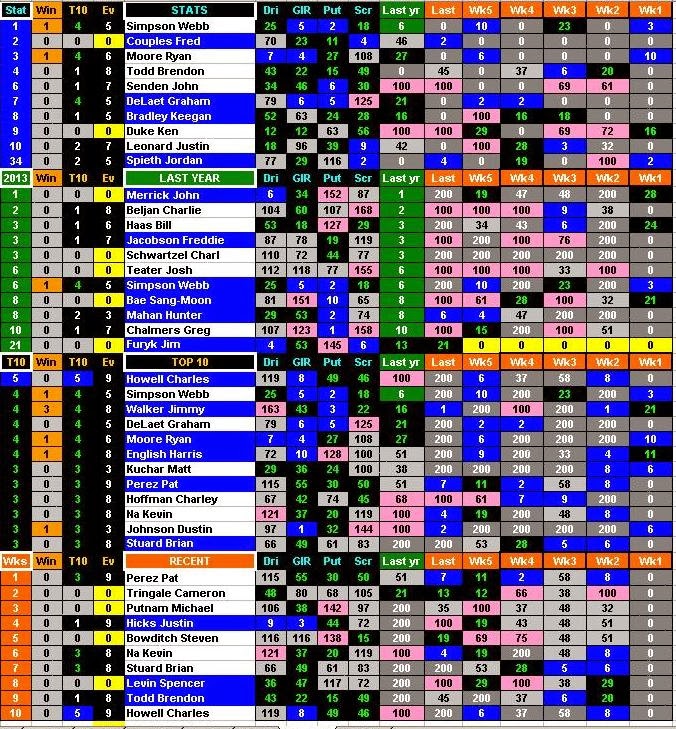 Two Courses - Sort of.
The last few weeks - at Torre and Pebble - players rotated through different courses at a single tournament. Riviera is only one course - but can be very different - depend on when you play it.

Dustin Johnson is trying to prove me wrong about being overrated for this tourney. He is off to an Early Lead at (-5). Johnson made several very long puts for Birdie. If his approach shots get closer to the hole - he may be fine. But - you can't count on making long puts to win a Tourney - especially when the greens get spotty in the afternoon. My buddy Brent Holden, who has played Riviera, pointed out that the greens grow fast and with traffic and can get bumpy by the.afternoon. The names at the top of the leaderboard all played the morning round. They will play late tomorrow and things should even out. I expect a log jam around 4 or 5 Under by the time they make the cut tomorrow night.


Jordan Spieth
Was off to a Great start with an Eagle and birdie on the front nine. That came in handy after 3 straight Bogies and on the Back Nine and another on 18 to Finish 1 Over. He and the other late starts today will need good rounds in the morning to stay in the mix. 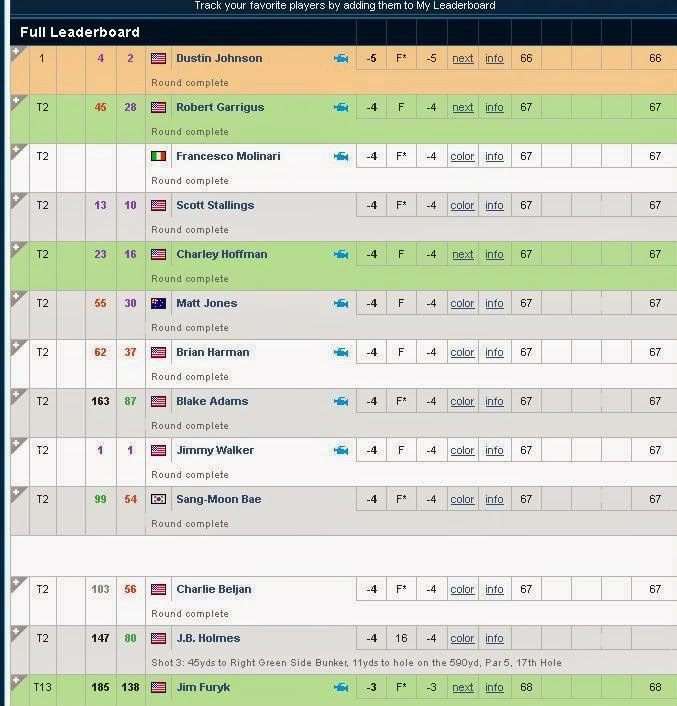 HE'S BAAAACK
Jordan Spieth +1 after yesterday - started quietly on the Back Nine with one Birdie on 11 and Straight Pars until he Rounded the Turn for the Front Nine. He Birdied the 1st - then a Bogie on the 4th and it looked like this was going to miss the cut.  Then he proceeded to Birdie 4 of the last 5 Holes to Finish the Day 5 Under and -4 on the LeaderBoard. Go Jordan!


Sang Moon Bae
Who finished 8th last year has the Early Lead Today at -9. As I mentioned before the tourney started "Online Books" (Above) The Sportsbook's wouldn't let us bet him - not on any of the sheets. Lot of Tourney left - that would hurt though if he did hold serve and win this thing.


Jason Allred
Web.com Graduate from Ashland Oregon has the Low Round of the Day so far, 8 Under after 13 T3.

Dustin Johnson Struggles
in the 2nd Round at Riviera. Unlike his Fast Morning Start Yesterday - Johnson played the afternoon round Today just 1 Under. He missed Fairways and Puts and was lucky to Finish at -6. He is still at threat though. He hits it so long that he usually has a wedge into the green on the par 4s. He is 97th in Driving Accuracy though, and 144th in scrambling from the Rough.
He only hit 50% of the Fairways today, but had some great saves to give him birdie chances. He is 1st in GIR. But he didn't sink puts like yesterday. Instead of making 20 footers - he missed inside10 feet on several occasions. Better Drive Accuracy and a Hot Putter will be needed for him to stay in the hunt through Sunday.


Our Bomber Garrigus
Hung in there to Finish -8, 2 Off the Lead. Keep an eye on Justin Rose as the season progresses. This is his first start of 2014 and he still looked like a threat until several Bogies dropped him back to Even. He will be dangerous once he shakes the rust off. Jim Furyk still in the mix too at -6.  Our Boy Freddie Couples started strong 3 Under, but hit a rough patch and never recovered. He will miss the cut at 2 Over.

Waiting In the Wings
are 13 Talented Players including Jordan Spieth - between 4 and 5 Under. They will have the advantage of an Earlier Start than the Leaders Tomorrow. With no Moisture the expected over the weekend - the greens will keep getting be harder and faster. Expect an Exciting Finish on Sunday. Sang Moon Bae currently holds the lead at  -9. 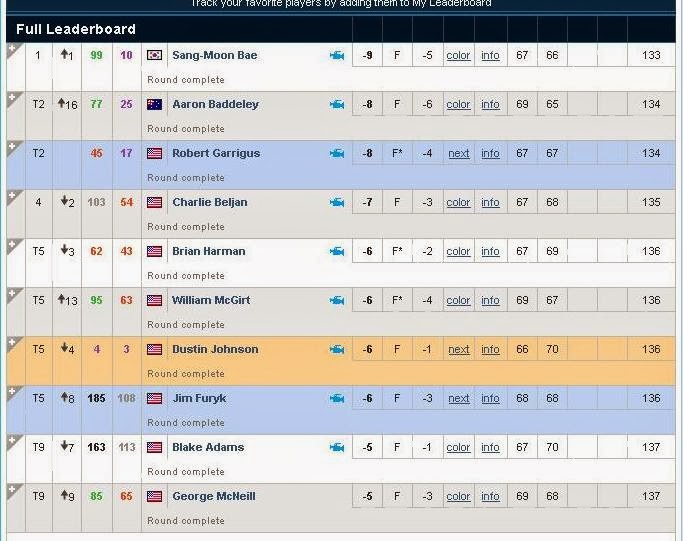 
William McGirt
Holds the Lead at -12. His best finishes are 2nds. Both came at RBC Canada.
Charlie Beljan

Last years runner up - is T2 at (-10). Really Shady of LVH and William Hill to leave him off the Bet sheets at the books. I wanted to bet him but couldn't.
A Talented Group
is circling the leaders at (-8) if McGirt fails to hold serve.
Dustin Johnson
Only bettered his score by 3 strokes after a strong start on Thursday. (-8).

Jordan Spieth
Started strong on the front 9 today with 4 out 5 birdies. But, he slowed down on the back 9 - Bogied 16 and Bounced back for a Birdie on the Par 5 17 to Finish 4 off the Lead and 2 Off the Leader Pack at -8.  He'll need a strong Front and Back Nine to compete for the Lead on the Final Day Tomorrow.  He does have a bit of Sea Biscuit in him though.  He is known for shooting Low and challenging the Lead on Sundays.

At The Break
Coverage Resumes CBS 12 Noon.  All Times (PDT)
The Leaders have left the Door Open so far. Overnight Leader McGirt still at (-12) after 4 holes.

Jordan Spieth Leads a Pack of 5 Players T3 at (-10). Jordan burned the edge on a few puts or he's be tied for lead. Spieth<(Ticket for $2100) will probably need a 2 shot lead in the clubhouse to have a Real Shot at stealing this one. But his putter seems on track. Needs to throw 5 or 6 darts within 10 feet on approach - to give his short stick a chance to win it for him.

Closing Out the Front Nine
Watson Has the lead after 8 at (-13) Bubba is Bitching and Whining at the Gallery every time anyone exhales.
Schwartzel Harman and McGirt T2 (-12)
Jordan Spieth T3 (-11)
Hits his 10 foot par Put on 10 - but it lips out. Brutal! Luck plays a part in this crazy game, He'll need some now and some help from the leaders. Lot to ask - but not over for him.
Jordan Spieth (-10)
Bounces right back on 11 - Sticks Approach - pushes it in for Birdie. But expected - it is a Par 5. Only one more left on the back - he'll  need to Eagle one of those most likely.
Jordan Spieth (-11) ]

Dustin Johnson with some nice up and downs to stay 1 Off the lead (-12).

Lots of Errant Tee shots. Last year it was a comedy of errors by the leaders coming down the stretch. Anything can happen.
Watson Wild approach - been lucky - almost behind a tee 30 feet off the green. Has a shot - but short sided a bit.Good Chip about 6 feet for Par (-14)

D.J. in the Bunker.Almost holes it - bounces past 6 feet. Sinks it (-12)
Schwartzel bounces back - holes it from Bunker! (-12)
Harman bounces back(-12)
Jordan Spieth Bogie! (-10) Bogies 14 too - He's Toast (-9)
Watson swinging his arms way out - away from body on Tee shots. (don't copy that) Not even trying to protect his lead.. But like I said - Luck plays a part. Bounces off grandstands just off the green in the rough. Par- better Lucky than Smart (-14)  Bubba should have an Orange Vest on. Just hitting it as hard as he can and picking up his garbage around the green. 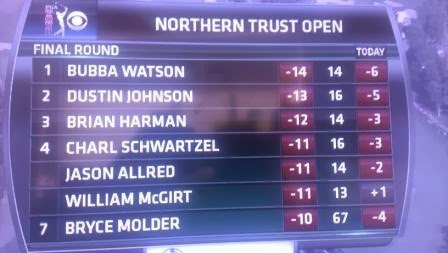 He sinks it!
Watson Wins!

Look for Harman on the Bet sheets
Remember this Tourney next year. Too Much luck involved - Save your Money.
Players were sticking approach shots - just to watch them roll off the green
My Srambling form the Rough Stats were worthless as they cut the rough.
If it were thick like last year - you have a different final leaderboard.
Anyway - learned a lot. Ready for next week!


I Predicted Jordan Spieth would win within 3 weeks
That was 2 Weeks ago
1 Week Left - Still have Faith in the Kid.
Maybe he learned how to close
during his last two trials by fire.