All the Regulars are at pretty Low Odds.
The ones in Blue are just as Good at Good Value. 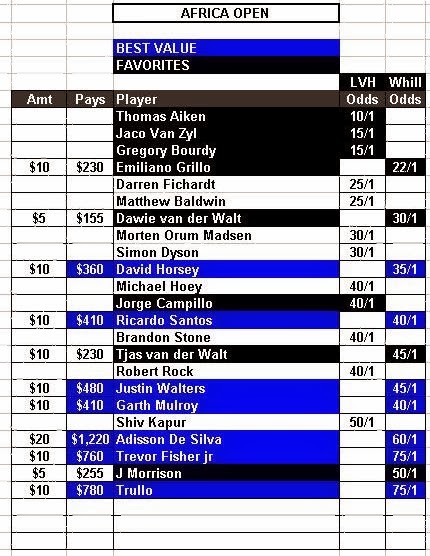 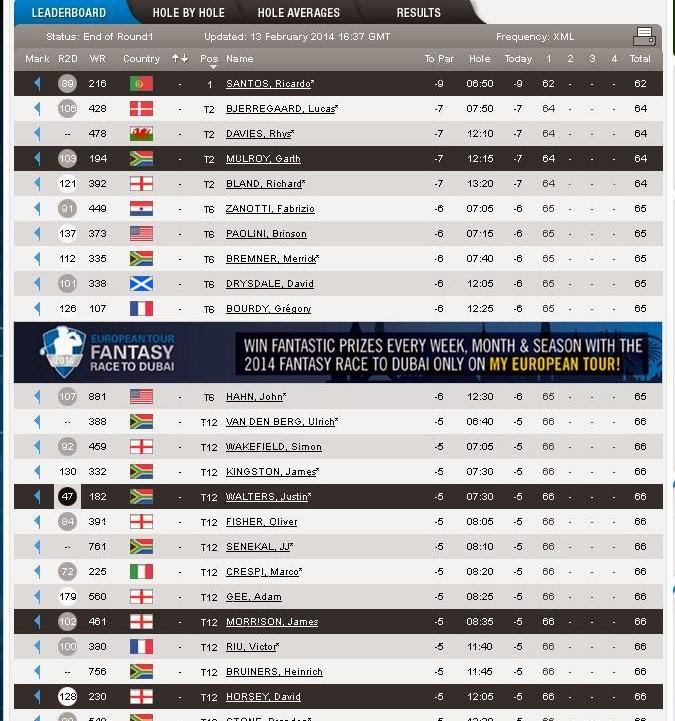 
Santos in Clubhouse with Lead.
It looked like Santos was just gonna run away with it after the morning rounds ended.
Santos went to the clubhouse -14 with a 3 shot lead over 2nd at -11.
Oliver Fisher later came within 1 at -13 and Horsey finished well -12.
American John Hahn started quietly on the back 9 shooting 2 under.
Aiken and Grillo made their runs at the lead to finish -11.
De Silva and Tullo stalled at -5.

American Late to the Party
The announcer mentioned from time to time that someone named Hahn made another birdie.
As if to say Who? By the time coverage ended Hahn was tied for the lead at -14. He wasn't finished - ending his round on the easier front nine with 6 Birdies and an Eagle. That's Right - He shot a (28) on the Front Nine! Hahn one of 4 Americans to gain his Tour card qualifying in Europe in 2013. He is friends with Uihlein and Koepka who qualified in Europe as well. Hahn's only statistical weakness seems to be Driving accuracy 59%. Hahn currently holds the lead at -16.  Hahn and Uihlein grew up around golf - with fathers who worked for Titleist.

Weekend Scrum
12 Players are within 6 of the lead going into the 3rd Day. 5 of those 10 are Our Picks - Santos, Horsey, Grillo Aiken and Mulroy.  Expect to see some changes in the leaderboard by end of day on Sunday. 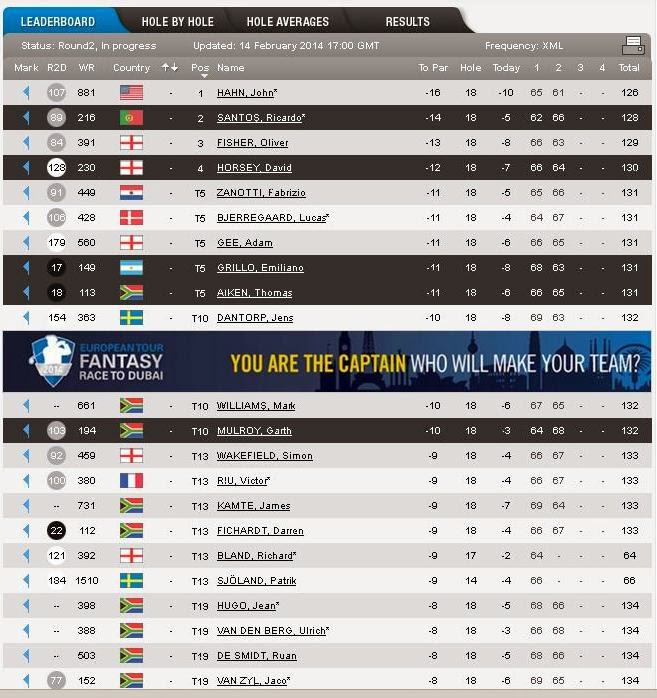 
Hot Off the Grillo
I had never heard of Emillio Grillo until 3 weeks ago at the Dubai Classic. He Sank a must make 70 foot put and took the clubhouse lead that week.  He was In the mix again last week at Joberg - I had to bet this guy. He continued his Hot Streak today  shooting 9 Under to take the sole lead at (-20).  He started the day 5 Off the Lead. If it weren't for a lip out on 17 and missing a birdie put by an inch on 18 - it would be a 4 shot lead.

Ricardo Santos had one of those days when nothing goes right. Ended badly too - as he hit his 3rd shot on 18 from the Tee box to finish miles form the lead at (-12)

5 Players have a realistic shot tomorrow - Including (Our Picks) - Aiken and Grillo.
I like Grillo with a 2 shot lead. He has been making Low Rounds a Habit Lately. 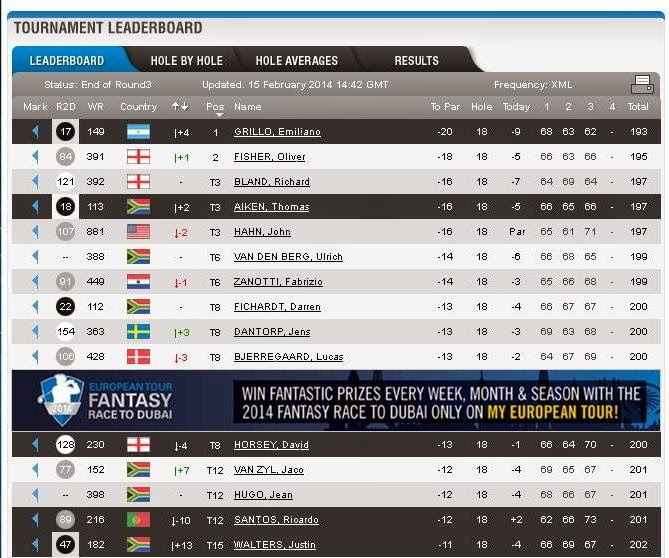 Out of the Pan - Into the Fire
I woke up this morning with a ticket for $230 on Grillo. 2 Shot lead - he's playing great - may have some extra Sunday cash. I hit play on my DVR to see if he could hold serve in the final round. There was Grillo on the first hole. He was in a Tennis Match alright - with himself. My head went left and right like I was watching Wimbledon. The ball ran way past the hole one way - then the other. Over and Over again. This was a John Daily level disaster. 9 shots later, Grillo had given away the lead and was 5 over for the day. On the 1st Hole! He tried to bounce back with a Birdie a hole later, then came 3 more bogies on the front.
To his credit - he finished the back 9 with 5 straight Birdies and a nice paycheck (-18). The Air is thin up there - but this kid is the real deal. I will have money on hm in the next tourney he plays.

Ticket to Ride
I still had Horsey for $380 - who made a nice late run to take the clubhouse lead at (-19)
The fun part about Golf - like football - is you root just as hard against the competition as you do for your team or player. My shouts of "Hook! Slice Shank! were in vein though, as Thomas Aiken and Oliver Fisher finished in a playoff at (-20) each.

Beauty on the Bag
BTW Thomas Aiken's caddy - like Patrick Reed's - is his Wife. Blonde hair, golden brown skin,  pink short shorts beneath her Caddy Vest. She is one of the most beautiful women I have ever seen. She was literally shaking as Aiken closed out his round. Thomas patted her on the head after he finished a difficult hole. She is obviously a great caddy and his biggest fan. Hot wives are a fixture on the PGA tour. NFL players have nothing on Golfers when it comes to marrying well.

Playoff? Playoff?
1st Playoff Hole. Par 4 18th
Aiken stripes his Tee shot.]
Fisher Tee Shot - Right - Sitting Up in short Right Rough.
Fisher Approach - from the Hill - down into the Valley Green. Drifts left - rests in between Bunkers downhill lie.]
Aiken Approach - Center Green - 40 ft from Hole.]
Fisher chip shot - off the slope - ball above his feet. 40 feet from Pin. 20 feet of green to work with. Punches it -runs past the Pin by 12 feet.]
Aiken - Put - For the Win - from 40 feet. Good pace - won't be short - heading for the Pin-
OMG! He Sinks It! Aiken Wins!
About Favorites
I play both tours - so I do not always have the cash to chase the favorites on the Euro. I did picked Aiken (in Black - Above) as a pregame Favorite - so I hope some of you cashed in at 10-1.