Luck of The Draw
The players in the morning wave Thursday - enjoyed the best conditions we will see this week.
The air was moist and greens were soft. As Jordan Spieth, who watched the morning round before his afternoon tee time described it "I even saw the balls stick and spin a little".
Winds picked up in the afternoon, the fairways and greens dried out a little. Yesterdays late wave tees off on Friday morning. Anyone who shot low in the late wave Thursday - can put themselves in a great position for Saturday with a good round Friday morning.

The Leaderboard should give us this info on Thursdays and Fridays.
They don't.  I will: 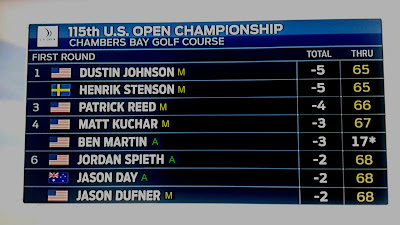 Friday Forecast:  (74)  20% chance of rain in the afternoon. Wind 8 mph This could give Fridays late wave a bit of a break. If greens are moist, and wind calmer than on Thursday afternoon. On the other hand, With a little rain - those rolling perimeters may hold the ball up when wet, that could keep bank shots from falling back down toward the hole.

Top Pick (Ben Martin)
Showed up Friday after several missed cuts on tour. We predicted this, based on his playing well at Chambers in 2010. His good late wave performance - gives him a shot at staying atop the leaderboard with a good morning round on Friday. 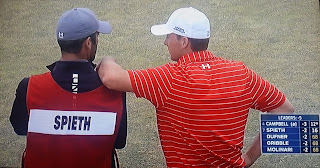 Top Pick (Jordan Spieth)
Showed up in the late wave as well. It wasn't Jordan vs Rory. Instead it was Spieth vs Day. They traded punches sticking approach shots so close to each other - the balls collided. His caddy Michael Greller was very helpful - having carried the bag at Chambers 40 times previously. Jordan played well, but was on track for (-4) and fell a little short.

Looking at the Hole
when he puts is the only thing that could cost Jordan a 2nd Major this week. He missed 10 puts inside 10 feet in his last outing. It actually cost him a win - directly. He finished (-13). Playoff was (-15). Do the math. He is currently 200th from 5 Feet - the range in which he looks at the hole. Yesterday he butchered a 5 foot Eagle put doing this. Birdies are at a premium here. One per day = 4 lost strokes. Looking at the hole takes your eyes off your putter swing path, the contact point with the ball and the putter face follow through. Mistaken for a positive mental exercise - It is nothing more than a variation on Chevy Chase putting blindfolded in Caddy Shack. Sure, you can get away with it half the time on short puts - But you should make 99% of those. STOP IT JORDAN! 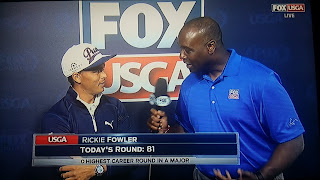 Fowler's Folly
As I predicted - http://stateoftherock.blogspot.com/2015/06/the-real-dirt-on-chambers-bay.html

telling everyone how much you love the course - bit Ricky in the ass on Thursday. He was one shot worse than Tiger at (+11). Phil voiced his admiration the course as well and as predicted - may join Fowler in front of the TV on Saturday - if Phil struggles in the late wave on Friday. 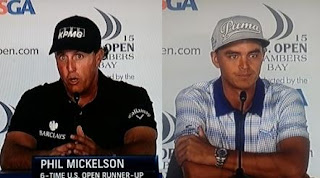 Michelson came out hot (-3) on the front nine, but settled for (-1) in perfect conditions.  Ricky needs to stay as far away from Phil and his Hijinks as possible. I like Ricky, he is good at links courses and had a great practice round. But he needs to learn to keep his mouth shut when things are going well. Something Phil will never do. His I's are too close together in interviews. 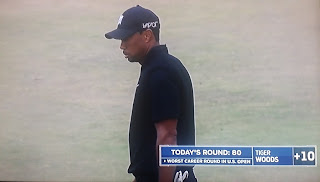 Walk Away Tiger (Delete and Reboot)
Woods shot (10+) on Friday. The only goods news as Tiger put it "At least I kicked Ricky's ass".   I've always said, practicing when you're tired is a bad idea. You just ingrain bad technique into your muscle memory. Tiger isn't tired, but his technique is bad. So is his method, his "process" the whole damn thing. He needs to leave the public eye, lose the swing coaches and stay away golf all together for a few months. Why? to clear his mind and forget everything Foley taught him and anything he's working on with Como. I said it would take a year to get those insane swing thoughts out of his head. http://golfpicks.blogspot.com/2014/08/tiger-woods-dumps-foley.html  He hasn't. He's just sorting through them - taking a salad bar approach.

Back to Butch
I'm not a fan of Butch. His school here in Vegas over-charges the public for carppy lessons. However, I'm sure he gives pros his best. Woods won 8 Majors under Butch. 7 under Haney. But Hank wrote a tell all book. He's not going back to Haney. Butch is where it all began for Tiger (other than his Dad). A good long break, followed by a return to where it all started - would be a recipe for success for Tiger in my opinion.