PICKS FOR TRAVELERS
JUST A FEW LONGSHOTS FOR BMW 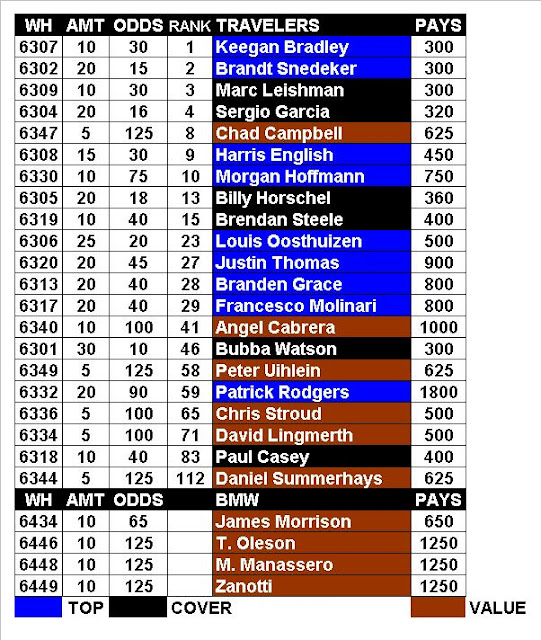 A BLAST FROM THE PAST
HARRIS ENGLISH
SHOWS UP!

OUR STATS SAID HE WOULD 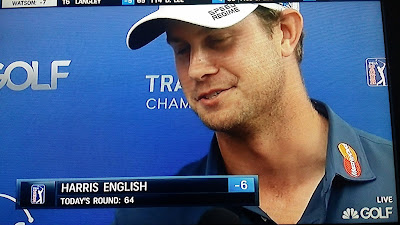 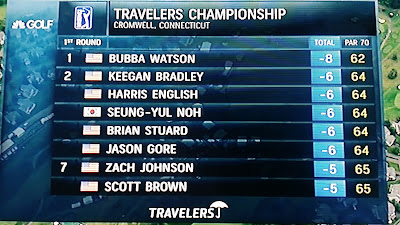 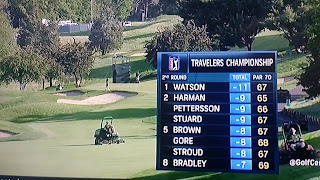 
Too Easy
I love scoring, but gotta say, watching Watson and Harman butcher shots on the final holes and still end up with par or birdie was less than entertaining. 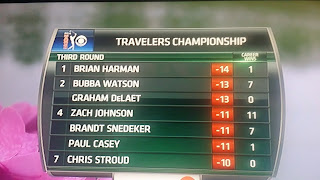 Brian Harman (-14)
Is playing out of his head so far with one round to go. As you know - I usually cover Brian Harman and Brian Davis as longshots. I dropped Davis and missed Harman in the process. If he shoots low he can close this out. If he drops a few - he brings a lot of good players back into play on a course where low scores abound. You'll know if anyone way back shot low enough to catch him by the time he tees off. The forecast calls for rain and thunderstorms just as his closest pursuers tee off around 1pm EST. No wind to speak of or much weather at all after 2pm. 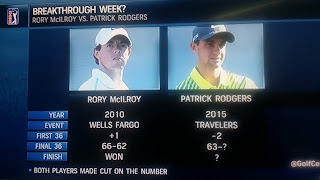 Patrick Rodgers
Gave himself a chance with a 7 under round on Saturday. If he tees off early in decent weather - he could get a head start on the leaders if he shoots low again. Got him for $20 at 90-1. Patrick can bomb it too which could help him on soft fairways vs the field.

Harris English
Cooked a chip for double and would need a really low score to factor on Sunday.

Update: Playing in groups of 3 in expectations of weather delays
Looks like the weather will only be a factor
from 1 -2 pm now


Patrick Rodgers (After 3)
is crushing it off the tee - leaving him a wedge into the green. He birdied a long put on 1 - but has wasted those easy approach shots - none within 20 feet so far. He needs to adjust to the soft greens - it's not gonna roll out - time for pin hunting Pat! 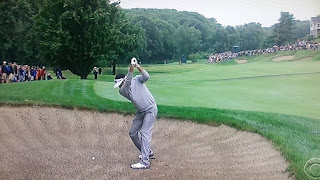 PLAYOFF - WATSON VS CASEY!
No Problem 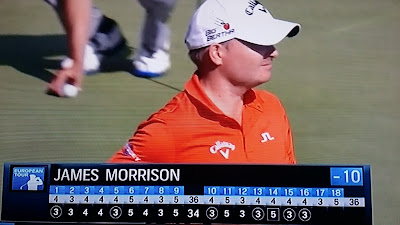 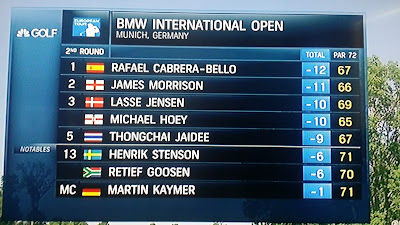 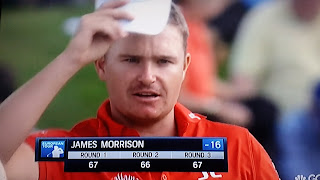 JAMES MORRISON
Takes the Lead Going into Sunday
No, I wasn't listening to Doors CDs when I picked him. Guess I had his name in the back of my head from the Spain tourney. He won there after Grillo put one in the water to give it away. Didn't even remember that until they mentioned it on TV.


There's a reason he looks dazed an confused (see below) 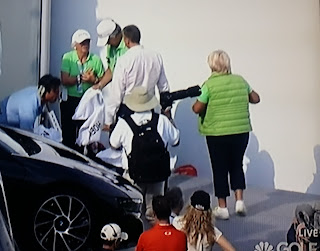 Every Golfers Nightmare
Bello fumbled and he picked up the ball and ran with it. He made critical par puts and shot an impressive, clean round until the final hole. With a 3 shot lead the par 5 18 should have been a cake walk. Lay up and birdie into the clubhouse = 4 shot lead.  His approach - going for it in two - hit a female Marshall. An older woman - visibly shaken. His response, "I yelled 4" In his defense - I think he was in shock. With a 3 shot lead - going for it was an impulsive decision at best. Then, nailing a 60 year old lady in the chest when you pull it left - nightmare for both of them. Buried in the rough - he had to avoid cooking it into the water on the other side of the green.  He walked straight to his lie (which appeared callous at first) and stayed focused on his chip shot, in the process - he bogied that par 5. Cutting his lead to 2 shots over Paisley and 4 shots ahead of the field. 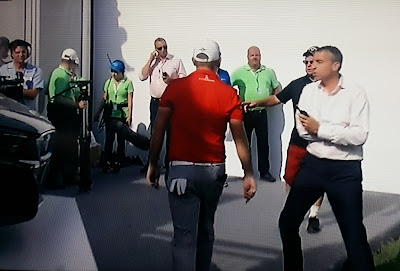 After a 2nd Look - Morrison was The Victim!
I just looked at the tape again. Morrison, headed straight for the injured woman and was physically prevented from comforting her. Two staff members reacted to him like bouncers removing a drunk that just groped a dancer in a strip club. Jeez! he didn't hit her in purpose! Anyone who reacts to pressure with aggression - should not be given a position of authority in a security or policing.

Morison was not callous at all - embarrassed and dejected - he went back to playing his hole. What else could be do? That kind of treatment by security had to mess with his head, and may have victimized him, as he ended up  with a bogie on a par 5 - 3 shots later.


0 for 4 on Par 5s
Those seem to be his Achilles heel, he only bogied one par 5 - but as great and calm as he played - he lost - in essence - 5 strokes on 4 par 5s. that is horrible course management. You want to finish strong. He had a chance to put this thing away with a 4 shot lead going into Sunday. His absolute butchering of 18 could give him nightmares. I hope he is given a chance to apologize and receives one in return from BMW. Let's hope he can get back on track tomorrow. He deserves to win and we have him for $10 at 65-1.

Nearing The End of a Starter
Ever wondered who that funny high pitched voice was announcing he player on the first tee?
His name is Ivor Robson.  His broken cadence has become a tradition on the European Tour.

Normal Tone: "On the tee from Germany, Mar - tin"  High Pitch: "Kay' - mer"The good news is he will be calling the British Open.

James Morrison
Everyting seems back to normal for him as he presented a signed car to Robson on the first tee. At (-16) he had a two shot lead. That all changed quickly as he bogied the first and continued to slide clear off the leaderboard to (-11)

Chris Paisley
played like a seasoned vet - choosing to lay up on a par 5 for birdie as Morrison when for it in 2 an bogied.  He came up short in the end - but played a great tourney

I Had a Dream
months ago that Larrazabal would win a championship.  But, cant chase a dream for 8 weeks.Missed him at 50-1. Betting my gut on Morrison almost paid off nice though. Oh well, still have Travelers. 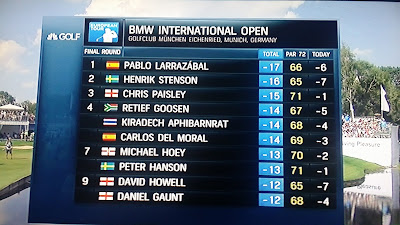