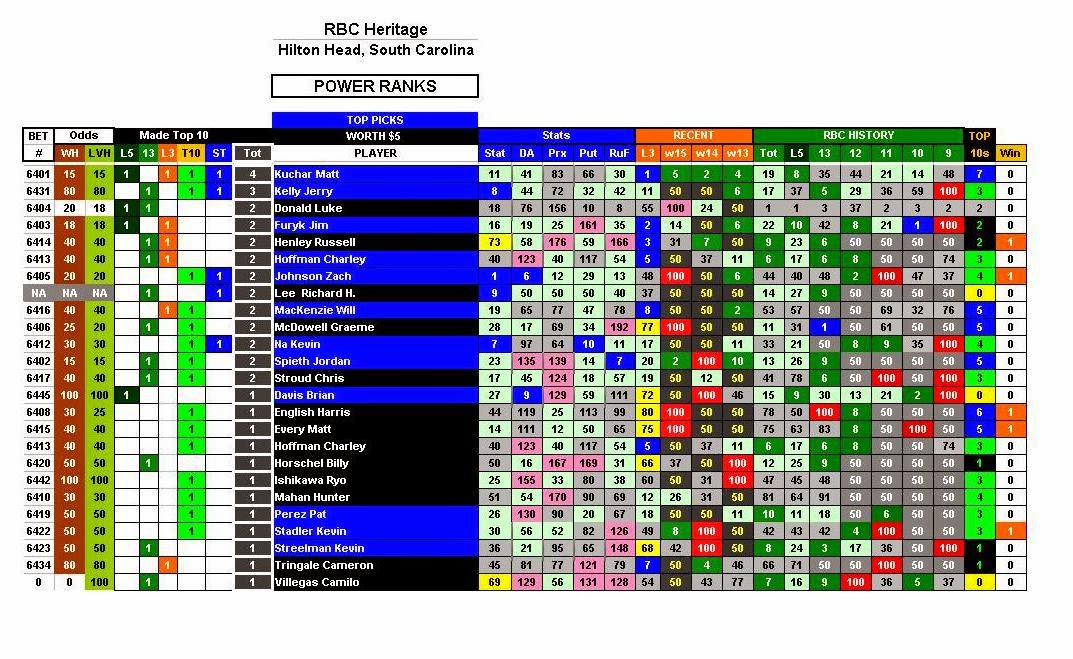 Now that the pressure of the Masters is Gone - Hoping Spieth can Pick up a Win.
If Not - Kuchar and Zach Jonson and Furyk are Must Covers in my Opinion.
Some Other Hungry Talent at Good Values as well.


Mr Watson ..Again?
For the 2nd week in a row - Jordan Spieth has been paired with a "Mr. Watson".
Last week Bubba. This week he is calling Tom Watson Mr. and meaning it.
Watson is the Ryder cup captain and the 3rd in the pairing is Davis Love his assistant.
Not exactly a break from the pressure for Spieth. LOL
But the way he's been playing - he'll earn a spot and won''t need a captains pick.
Spieth off to a good start again this week - 2 Under on Thursday - 3 off the lead. 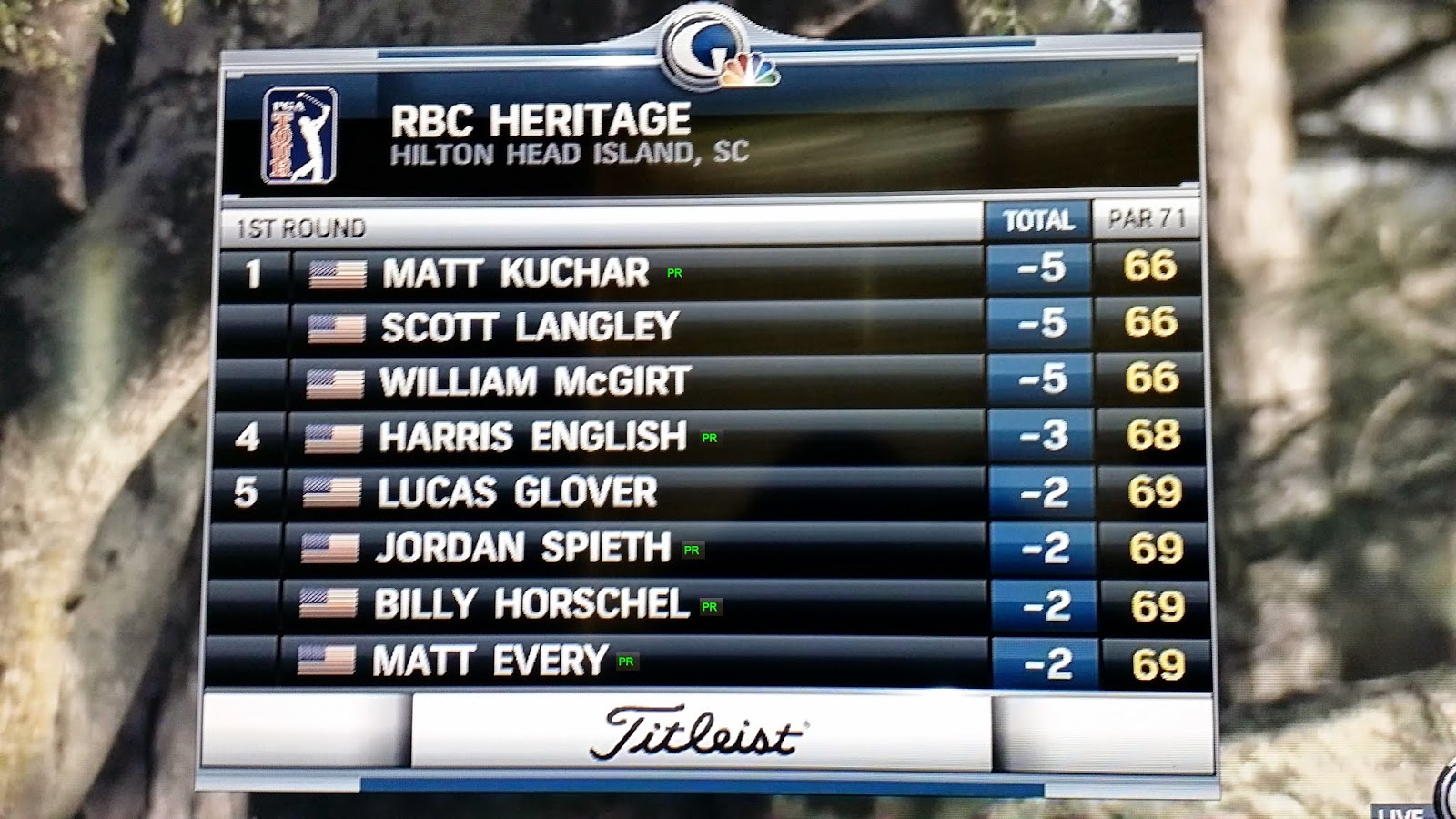 Power Ranks in the Lead
A Total of 5 Power Ranks Occupy the First Page of the Leaderboard.

Spieth Off His Game
The 2nd day of his Ryder Cup audition for playing partner Tom Watson is not going well.  He Missed Fairways and Puts on the front 9 - including a 4 put diaster on 18 for double bogey. He is back to even for the Tourney. He just pared one of just 2 Par 5s left in the round. He'll need several birdies on the last 7 holes to stay in contention. The only good news is that the field is struggling too. If Kuchar stalls (-5) - about to Tee Off now - he's still in it.
Jordan Finished (+1) Round 2
The short Puts that cost him a Masters win are Haunting him this week.
He missed several Today inside 10 feet.  Looks like he'll make the cut - but will need to light it up this weekend and hope Kuchar doesn't run away with it Today.

Matt Kuchar (-5)
has a dream scenario this morning. KJ Choi has tied him for the lead after 14 holes. Luke Donald is just one back after 11. But other than that - the rest of the leaderboard is several shots back and almost finished for the day.  He is about to Tee Off - If he shoots low - he can grab a huge lead.
Matt Kuchar (-1) after 6 Holes.

The Perfect Storm
May Have arrived in time to save Spieth.
The bad Weather may also be the reason for his poor play.
Kuchar made Spieth's Round look good - Shooting 4 Over on the first 6 Holes.
The Bad news is they blew the Horn. They will Finish the 2nd Round in the Morning.
So, Players at -2 and -3 do have a shot to still shoot low.
Realistically - It will still be pretty wet early.
Spieth will play after the 2nd Round Completes.
He may have a chance at Dry and Soft Conditions to start the 3rd Round.
Still Anybody's Game 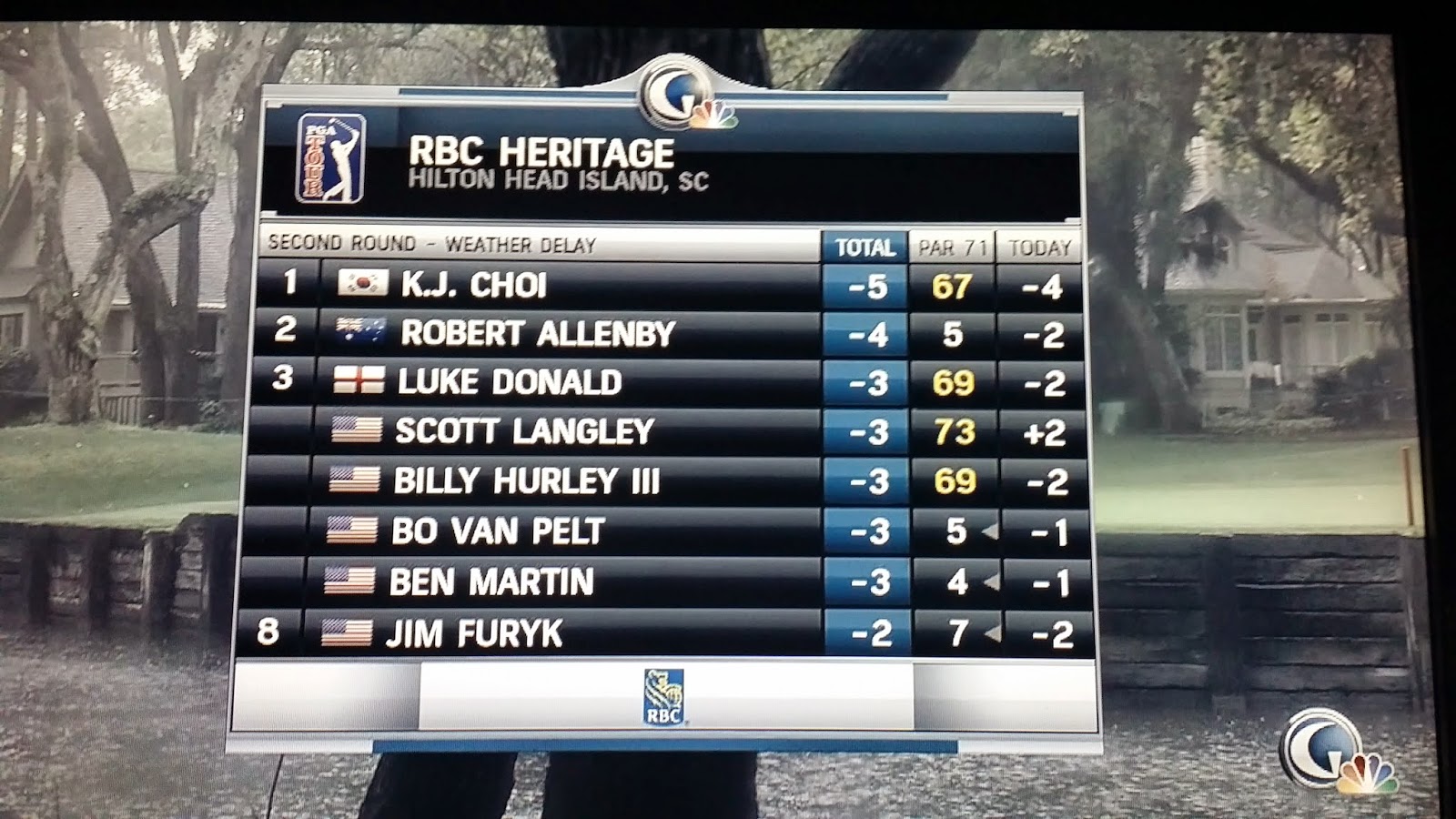 The Lead Remains the Same
The Lead on Thursday was (-5).
Morning Group Today Finished Round Two with the Lead Still (-5).
Spieth has length for the Soft Fairways and the Green will be Receptive.
He'll need about 6 Under Today to Make a Run on Sunday. 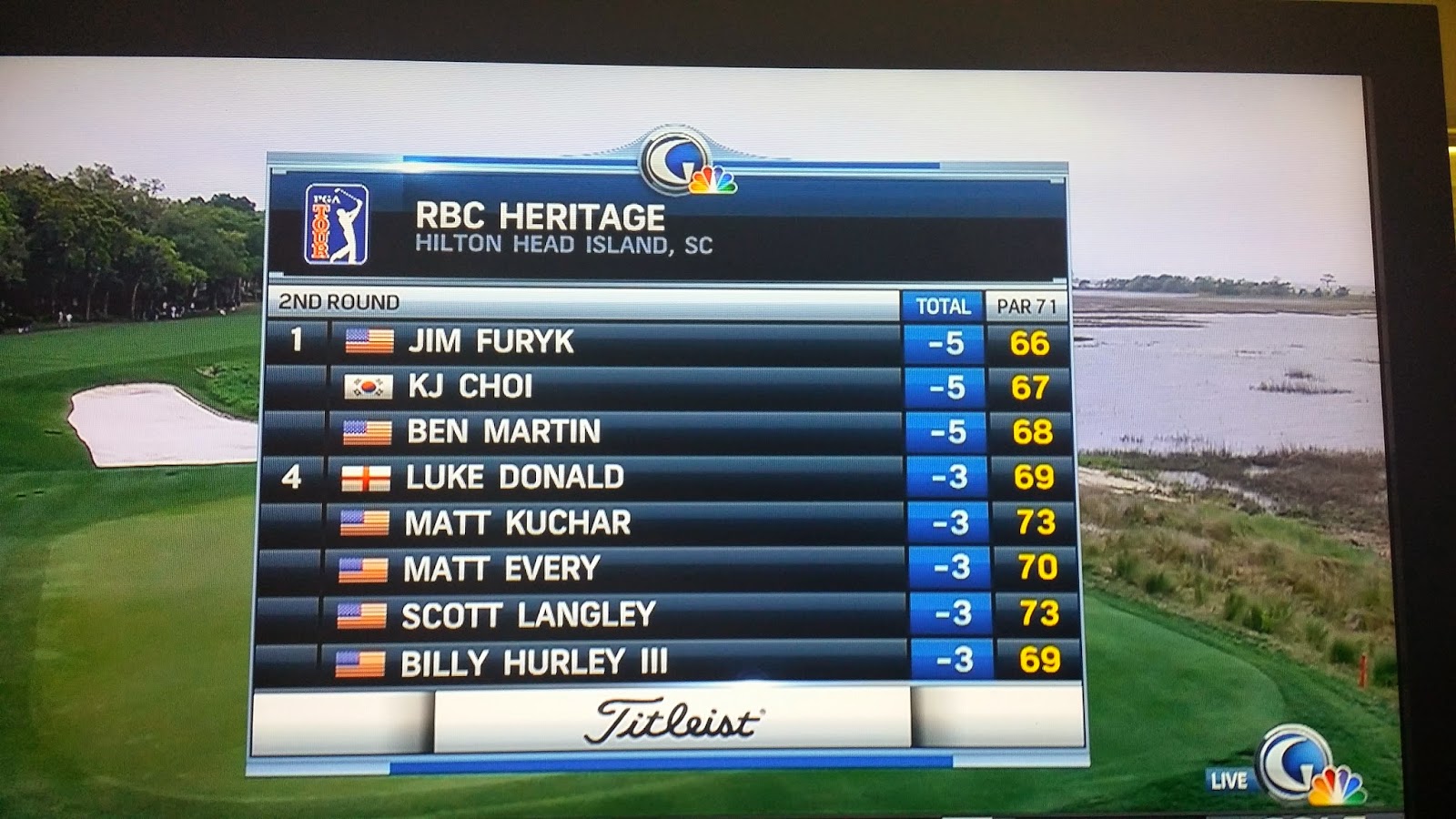 
Jordan Spieth
Off to a Good Start - Hitting Fairways and Greens. He missed a couple make able Birdie Puts. The speed of the greens has slowed a bit. If he can get the feel - he could make a Run this morning. His Round is being Featured now on Golf Channel. NBC will pick up Coverage at 12 Noon.

Patrick Reed - Alone in His Field 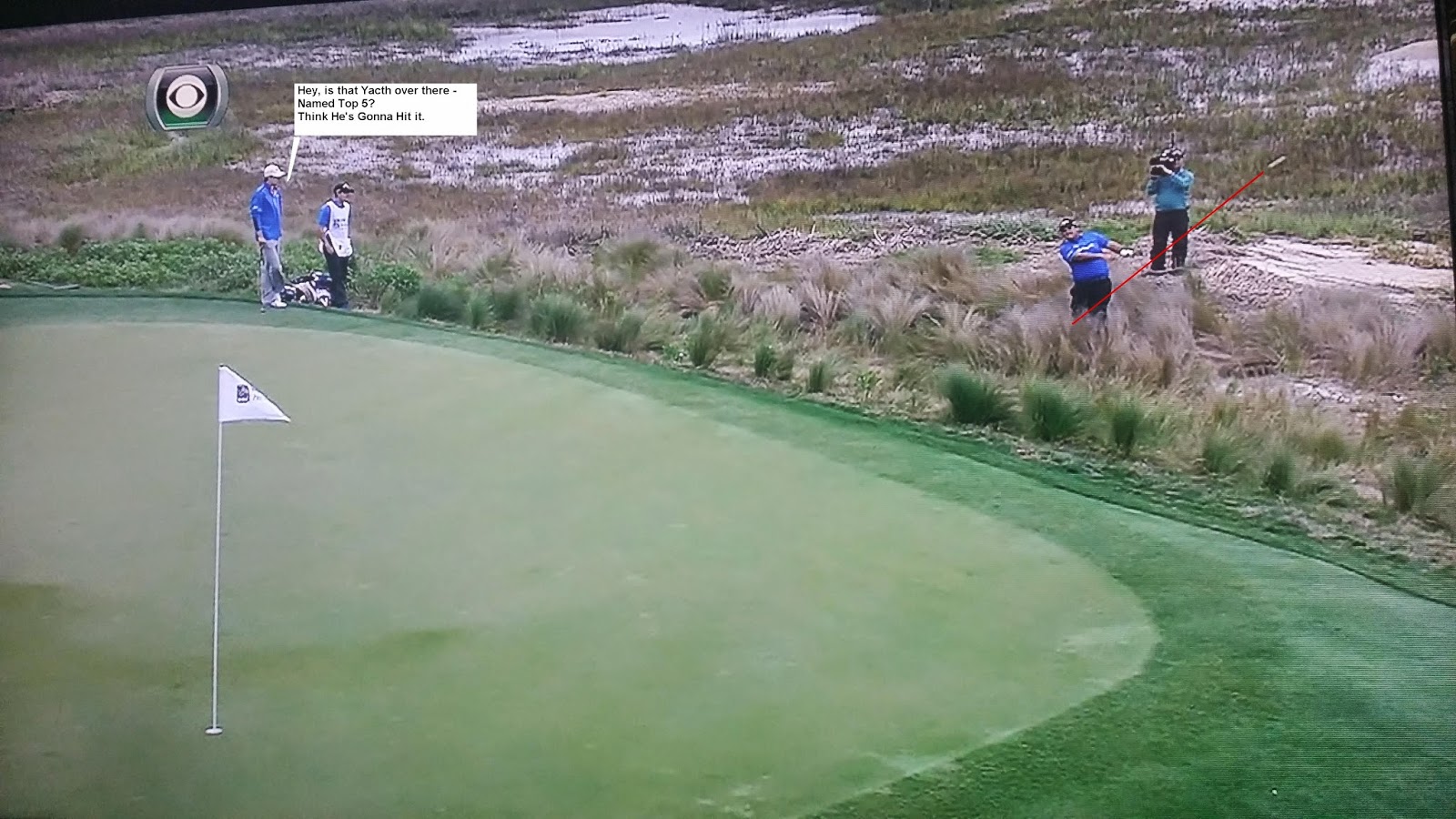 The Self Proclaimed Top 5 - Once Again, Setting Himself Apart from the Field
and the Green on the 18th Hole

Almost Hits the "Top 5" on this Hole 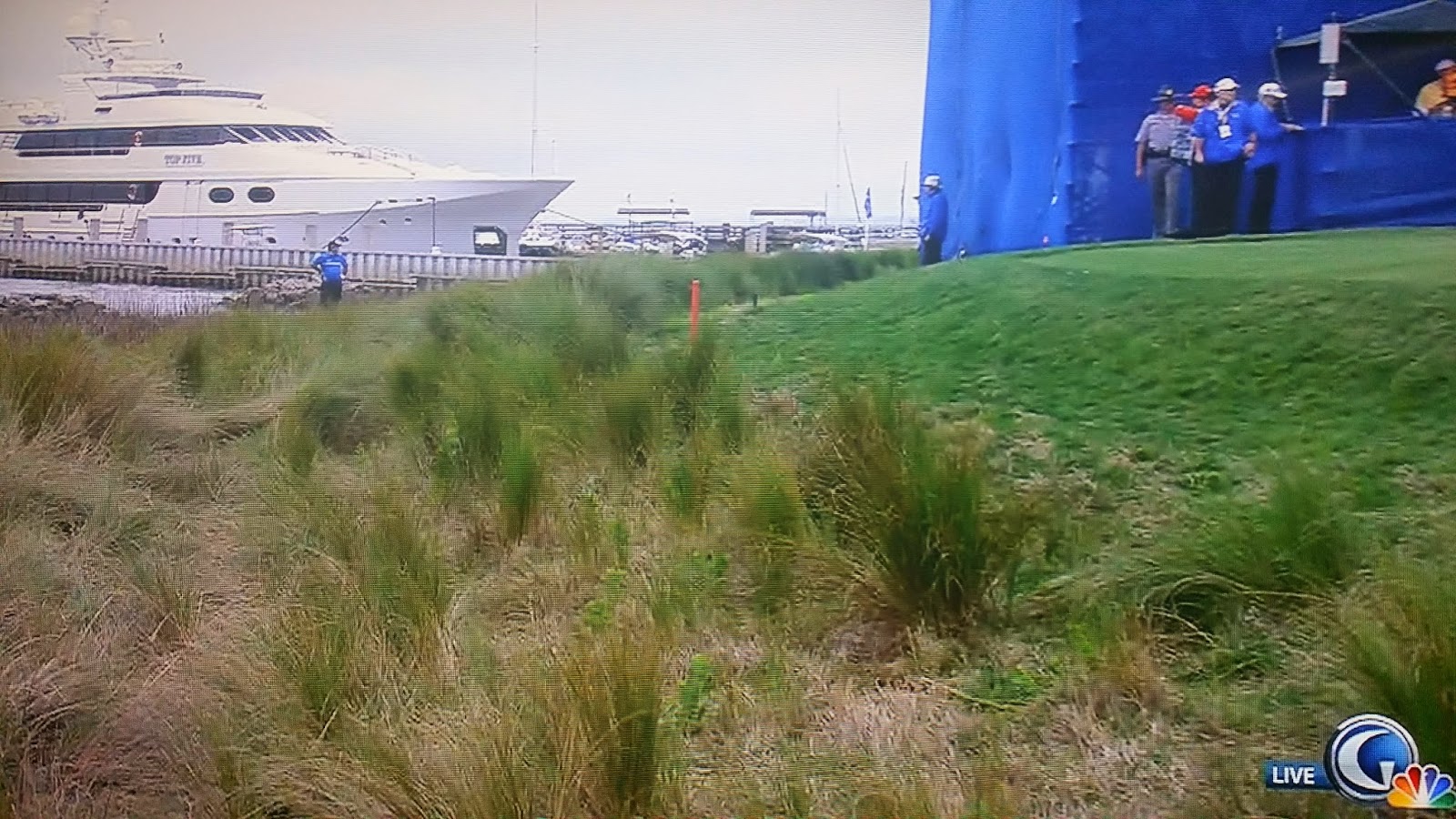 Not Sure if it's his Yacht - but that is the name of the boat.
He Made Double Bogey on that One. (+2)

Jordan Spieth
Spoiled a Golden Opportunity. Leaders Stalling, A Weather Break During his Round. He had a window that could have allowed him to be 4 or 5 Under and in the Mix Today. He Failed to Take advantage and Finished (E) for the Tourney at the End of the 3rd Round. 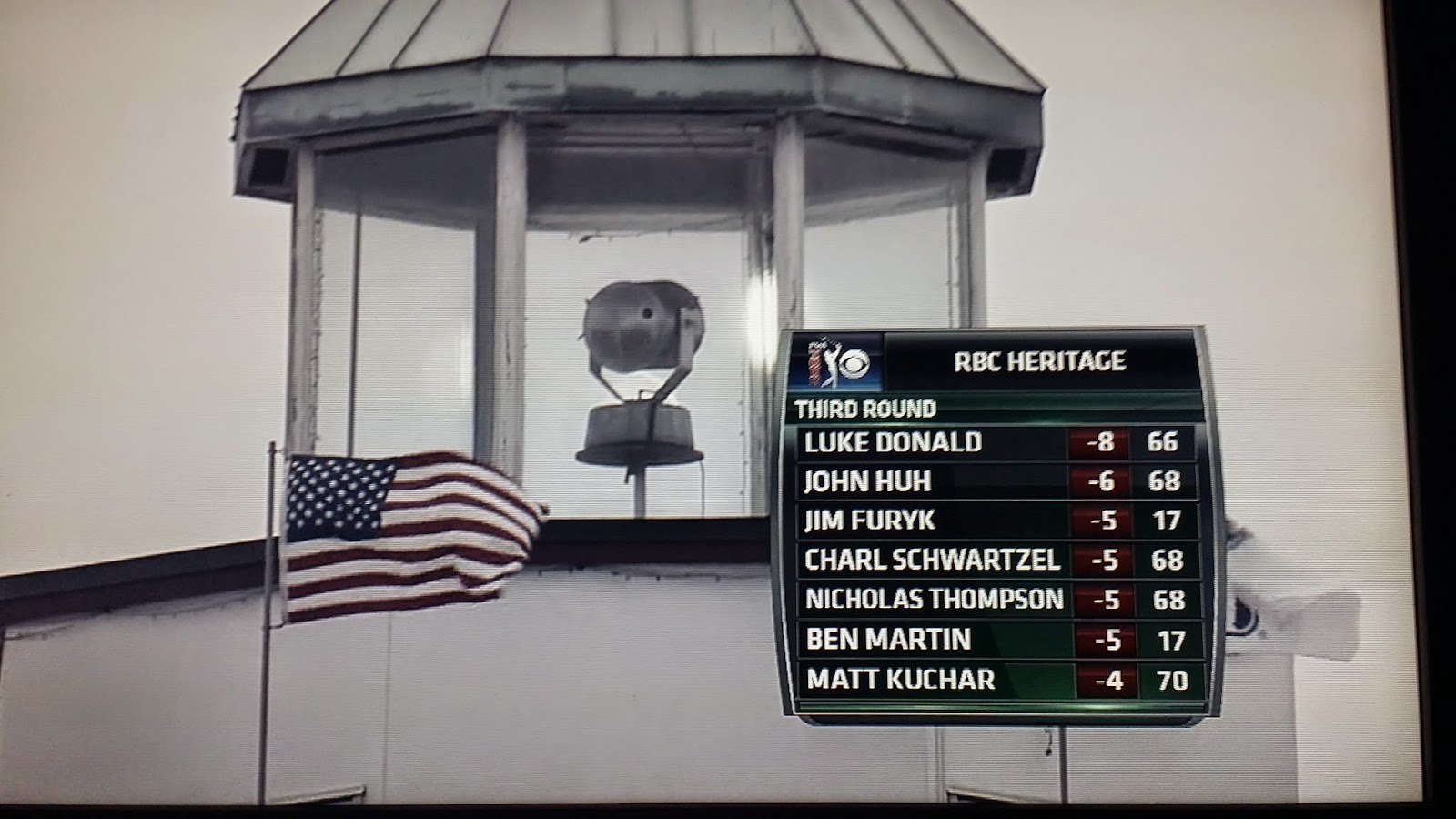 The Window Closed
For Low Scoring. Gust up to 35 MPH expected today - on a course with Narrow Fairways and Hard to Hit Greens. So, a low round comeback for Spieth or anyone else is unlikely.
Looks like another contest on Sunday to see who make makes the least Bogies.


Pat Perez
May Prove Me Wrong. He shot a 64 this morning to Finish well off the lead at (-3) .
High winds should stall the leaders again and one or two players could shoot low and make a late move.


Luke Donald
Has a 2 shot lead, Is great at scrambling and has a good History at Heritage.  However, with 3 Low Rounds under his belt - I predict he shoots 2 Over and does not win. LOL What do I know?

Matt Kuchar
Has the most Top 10s on Tour and 3 Top 5s in a Row. He also has 3 game Choke Streak going. If he doesn't win today - his ability to Hold a Lead or Close is seriously in question.
Can you Say "Sports Psychologist". Hard to feel too sorry for the guy. He was an investment banker that turned pro. Not exactly a "Make a Wish" Horatio Alger story.


Matt Kuchar
Took a 1 Shot Lead into the 17 Hole. Luke Donald was Playing Extremely Well.
Then Bam!
Matt Kuchar Sticks his Approach on 17 inside 2 Feet for Tap In Birde = 2 Shot Lead Going into
18.
CHOKE ONE 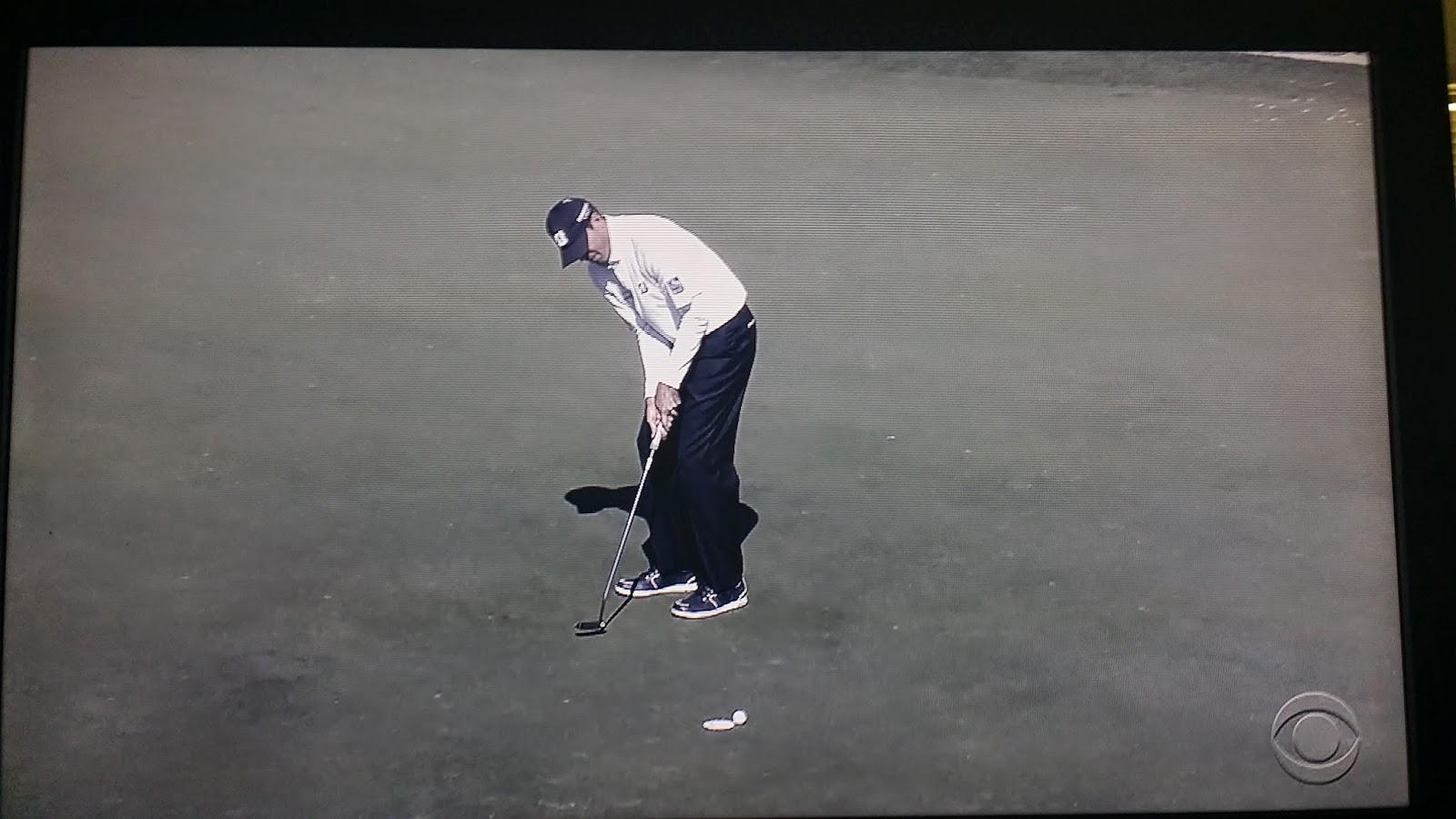 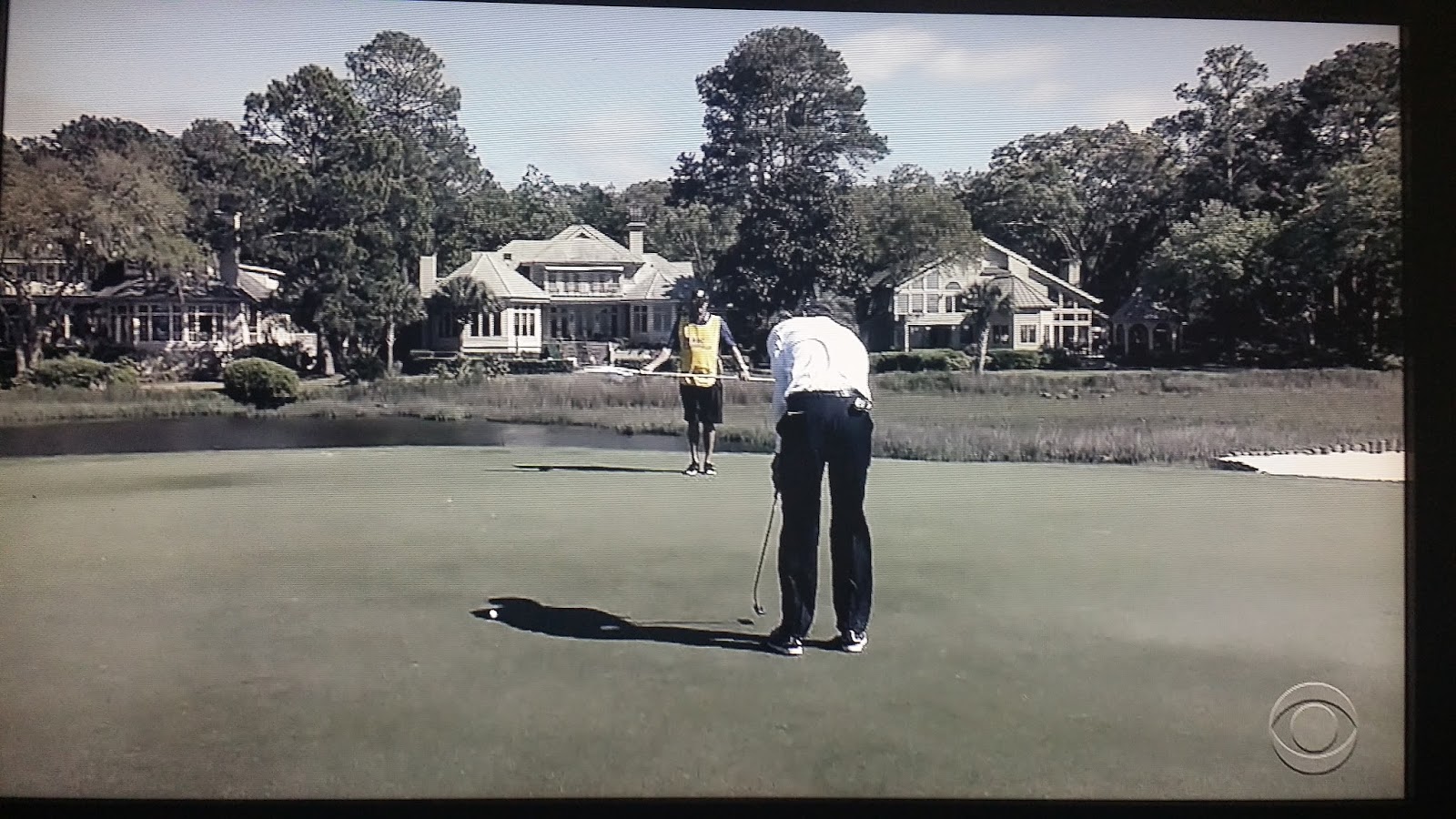 Matt Choker
Blows an Easy Birdie to go (-12) and Gives Away the Lead (-10) Tied with Donald who is playing great and ready to Birdie soon.


Matt Choker
Still Tied with Donald puts it in the Bunker on 18. 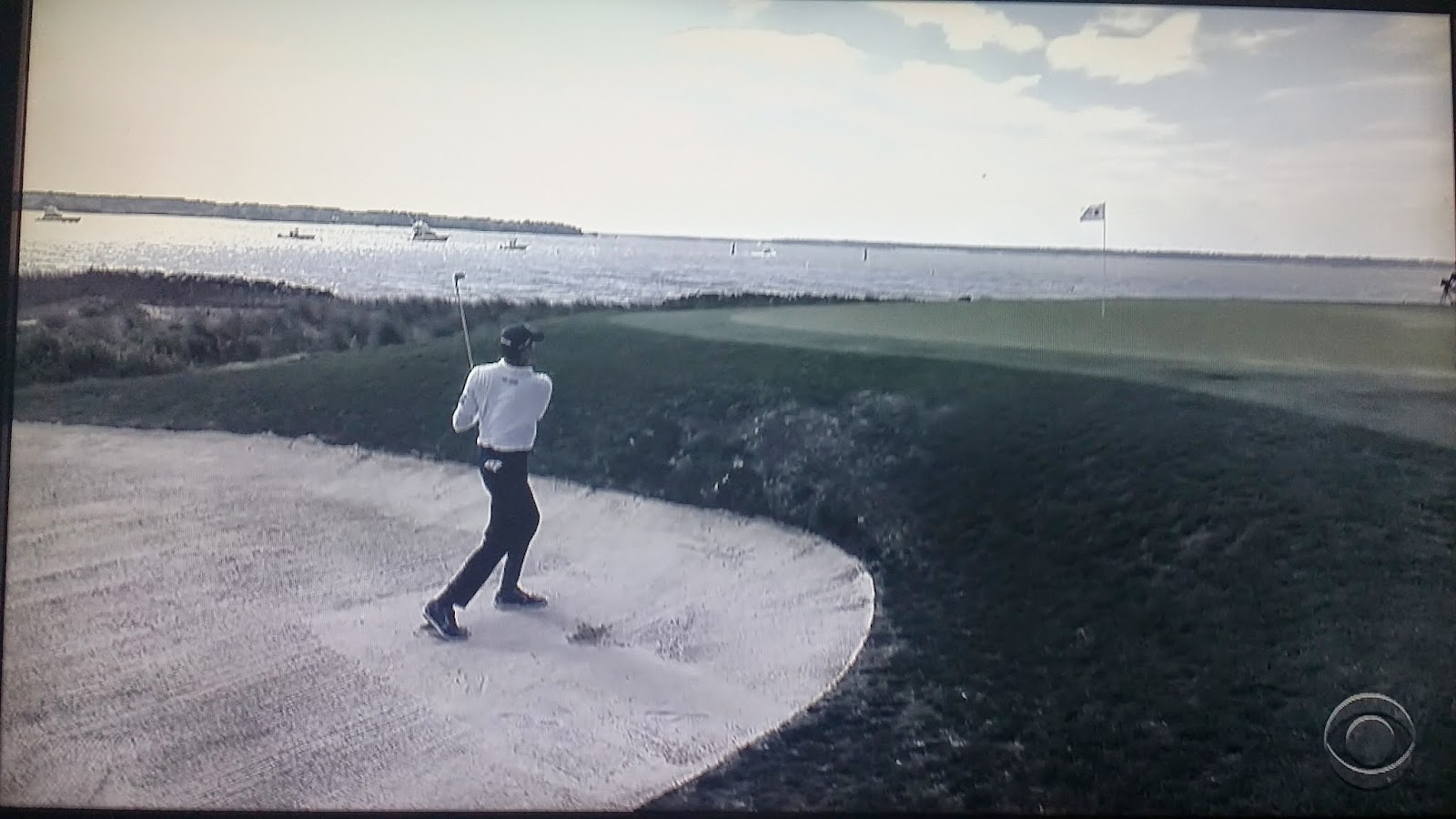 Hats Off to Kuchar
He Holed it from the Bunker 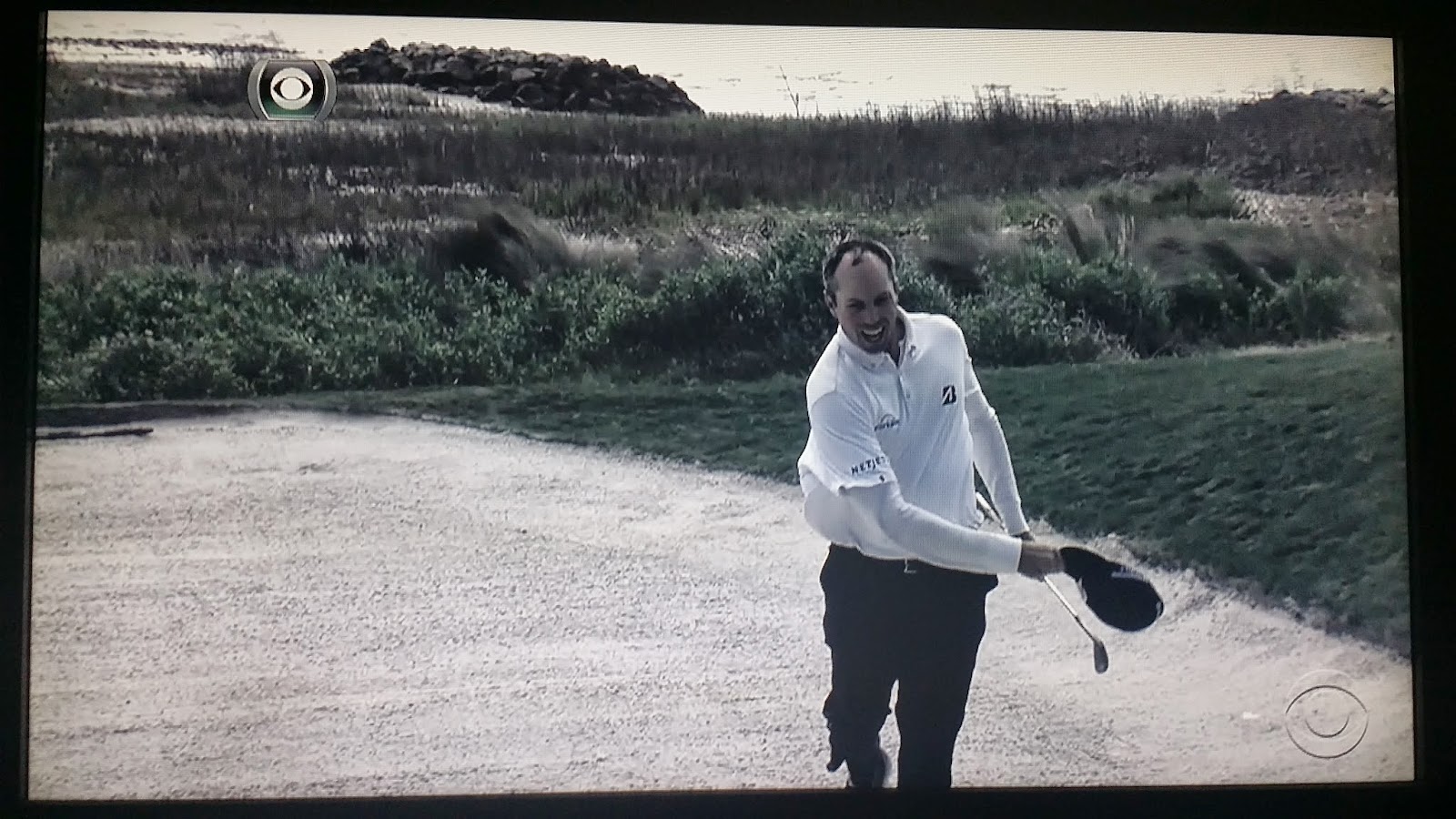 Power Ranks Paid Off
Got My Money Back 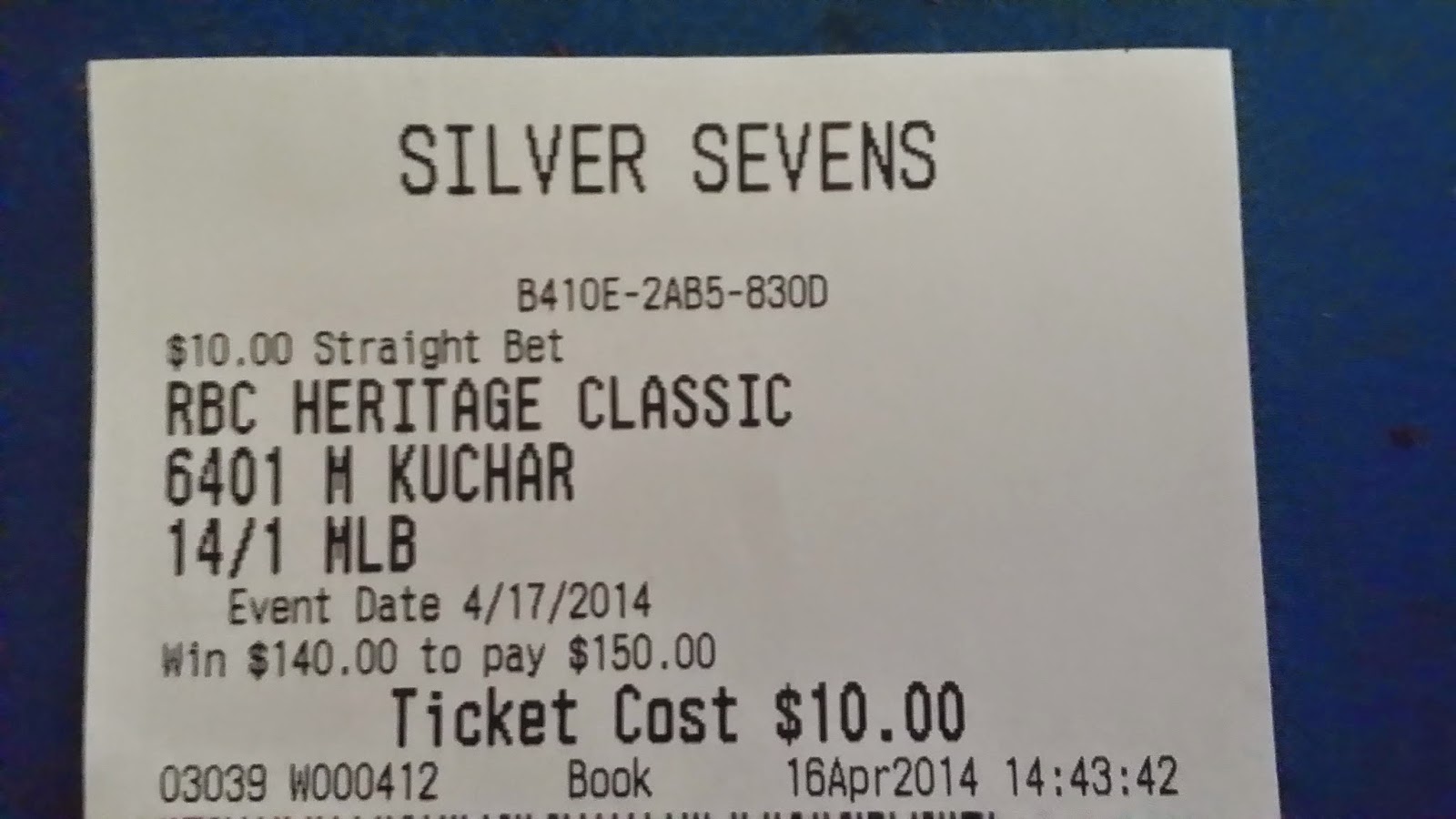