Jordan Spieth Returns to Farmers
If you have been following my blogs - you know that Jordan Spieth is my Boy. I saw him aqt Byron Nelson in 2010. Something caught my eye - so I looked up his stats on what is now called he Web.com Tour. His stats were off the hook - so I bet him anytime he popped up on a bet sheet. Made $900 on him last year - $30 @ 30-1. Made the same bet this week.
http://www.happycapper.com/Farmers2014.html

Spieth vs Jason Dufner
2 years ago I jumped on Jason Dufner before he got famous. I won $1600 on him when he Broke through at Zurich. Made another $500 on him at the PGA Championships. I'm still a big Duf fan - but he had a hard time playing with the popular kids in Big Tourneys . Even after being on tours for years. 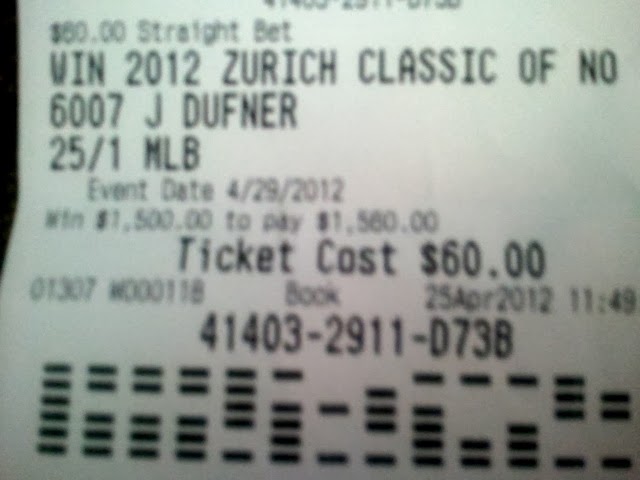 Spieth vs Michelson
Spieth, even at the tender age of 19 isn't phased by the spotlight. Last year was Spieth's first year playing on tour - playing on exemptions - without a Tour Card.  He was paired with Phil  one weekend. MIchelson with a big lead - had proclaimed himself the Winner on Friday. Jordan left Phil scratching his head as he bettered him by 8 strokes on the weekend.


Spieth at John Deere
Spieth really showed his ability to handle pressure last year at John Deere. he was 4 or 5 strokes back to begin the day on Sunday. That's like being down by 21 in the 4th Quarter of a Football Game. On the last hole of the Tourney - Jordan was one stroke back from the leader in the clubhouse. His approach on 18 landed in the bunker. He had to make it to advance, He holed it. He'll be the first to admit it was a luck y shot. But he put himself in that position. That Birdie put him in a playoff he went on to win. It was the most exciting Sports win of my life. 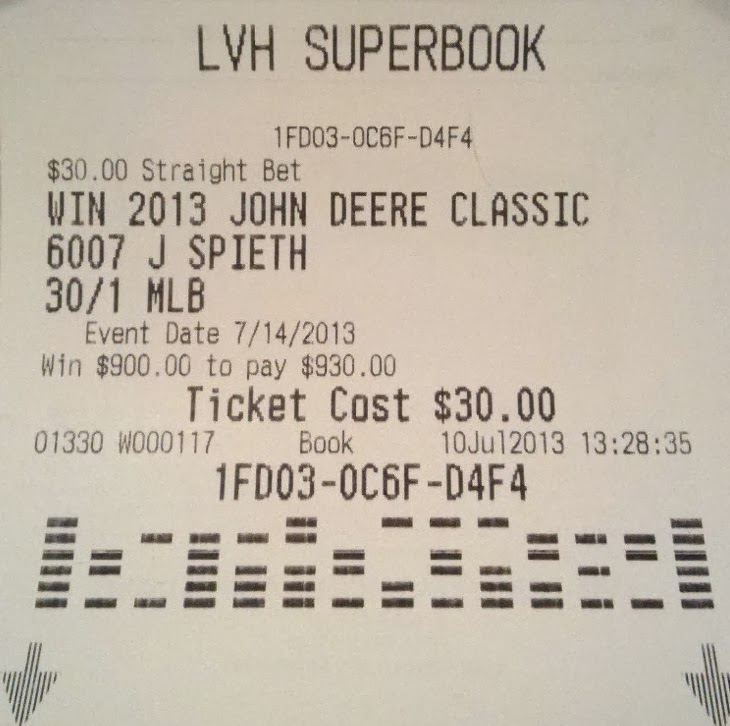 Spieth vs Tiger
Playing with Phil is one thing. Playing with Tiger is a whole different Universe. Seasoned veterans cringe at the thought of dealing with that media circus. Most don't even like playing behind Tigers group. Tiger's Gallery can make you feel invisible.

Spieth began the round today at -1, with Tiger Even. The leader was at 8 Under. Spieth was undaunted by the spotlight or the 7 shot deficit he needed to overcome. He quickly pulled away from Tiger shooting 4 Under on the back Nine. They started the day on the 10th hole. On the Front Nine he shaved 4 more strokes off his score in one 3 hole stretch. Spieth went on to add another Birdie to Finish at 9 Under for the day and with the Lead at 10 Under. This is what he does! Not since Joe Montana has any athlete been a bigger rush to watch. You would have thought I was watching Football if you heard me rooting for him this afternoon. He will have to return to the tough South course with everyone else the weekend. This is not even close to being over. But like Montana - although he may not always win - you would rather have money on him than anyone else. Here are some Highlights from today's round. Jordan's highlights are at the end of the short 3 Min Vid:


Thursday Night Update: Don't sweat the scores until Tomorrow Night. There are 2 Courses. North = Easy. South = Hard. Tiger and Spieth were on the South today. Tiger Even - Spieth 1 under. Spieth missed 2 short puts - or he would be 3 under on the South. The greens are tricky on that course. Look for a lot of high scores and missed cuts on the South tomorrow.

today was Pat Perez who shot 5 Under on the South. If I had known he went to school there at Torre Pines - he would have made my cut. His pregame stats were not that impressive. However, Based on today - he should have a good lead after playing the Easier North tomorrow. He is 123rd in Driving accuracy. Well see if he can keep it in the Fairway Sat and Sun. The rough is nasty. He had only 1 sub 70 round at Farmers Last year and finished 21st.

Keep an Eye on Aswegen. He's tied for 3rd with Jason Day, behind Woodland and Cink. Never heard of him - He appeared out of nowhere on the Bet sheet.  But all the leaders save Perez were on the Easier North Course today. They will switch to South tomorrow. Everyone will be playing South on Sat and Sun - two days in a row on that monster will be the real test - especially if it dries out or the wind comes up. 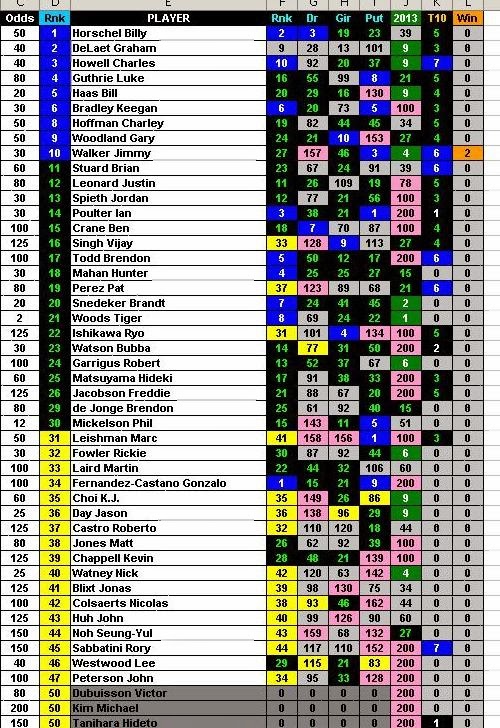