If you read my last post - you know Fowler was a big stupid miss @ 50-1. So, I created Golf Roulette to insure we never miss anyone again. This new format forces me to look at every player at every price level. It also helps monitor the weekly wager budget.

Risk and Reward!
Wells Fargo offers Great Value this week if you are willing to take a Risk. Unless you are on an unlimited budget  - you can't afford Rory (3-1) and Furyk (18-1) along with all the great priced players that have a real chance of wining this week.

The Risk
You make the call - put $200 on Rory and you have a decent shot of cashing that ticket. I'm gonna take a chance and spread it around on a field that is full of potential winners this week.
The odds are somewhat in my favor - it is hard to win twice in a month on tour - each of them has a win within the last 4 weeks..


Starting Line Up
I've listed - in order - the Players with the best Recent Finishes and best History at Wells.
I also comprised a Team of 2015 players I'm betting each week (when possible) along with a list of 2014 Players I'm still keeping an eye on. I think you will find this easier to follow than the huge charts I usually post. Please comment and let me know. 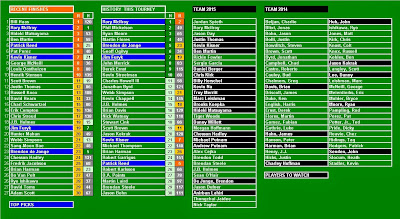 Note: There are several trending players not on the bet sheets in Vegas this week.
That puts them in the field at around 2-1 and out of reach.

If you are able - keep covering them online.

UPDATED!!!
Same as Above
Much like the tourney above - Garcia, like McIlroy  is a favorite for a reason.
Throwing it all on him could work this week? At 9/2 - Taking my chances with a few other very hot players.

Oleson and Uihlein coming off runner ups.
I also have to throw some on Emilio Grillo.
He missed his first win by one shot at Volvo.

Un-bettable
(On my not available list above) Robert Streb leads with a first round 65.
Our Picks (See Wells Golf Roulette Top of Page)
Patrick Reed and Chesson Hadley on the first page.

A Tale of Two Putters
I saw on Golf Channel that Rory just met with putting Guru Dave Stockton. His only advice in the 5 minute lesson - was keep the putter close to the ground. I've been preaching that for years. When you lift the putter - your chance striking off center is greatly increased. This was not good news - as I did not cover Rory this week at 3-1.

The good news for me - Rory has not perfected his new putting stroke and from what I saw is missing the proper stance and alignment to make this improvement work. He got to (-4) then missed several puts - doubled back to (-2). The other putter belongs to Sergio Garcia (See Open De Espana below) 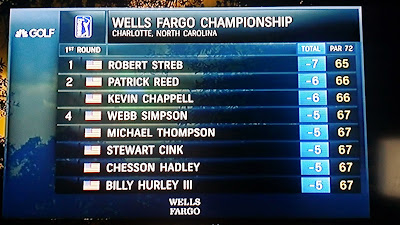 Rory Bounces back
Very much in the running at (-7)
Robert Streb is leading for the 2nd day and would be on our Roulette Board if he were on the Bet Sheets in Vegas. We do have Martin Flores on the first page. 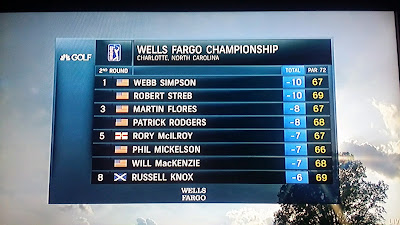 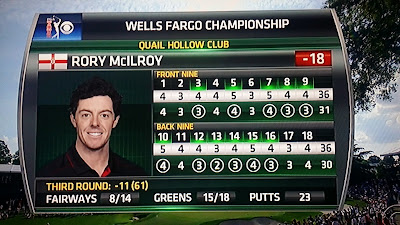 Rory - Worth the Price of Admission

In this case about $200.  As I predicted in the pregame summarry (above)

[You make the call - put $200 on Rory and you have a decent shot of cashing that ticket.]

Even though I did not cover Rory at 3-1, I was rooting for him to shoot 59.  His putter is working again. That, along with long drives that leave him a wedge into the green, allowed him to shoot 11 Under and run away from the field.

If Jordan Spieth
had 3 top 10s in a row - coming into a tourney this week - I would have put it all on him at 3-1. Then again, at 3-1? Maybe not? The "New" Golf Roulette board would not have made much sense to anyone with one name on it.


Poor Justin Thomas
Imagine shooting 7 Under to tie the lead. You expect the late wave leaders to follow you and shoot 2 or 3 under - you still have chance on Sunday. Then Rory shoots 11 Under! Justin will be 9 back when he Tees off tomorrow.  Brutal. 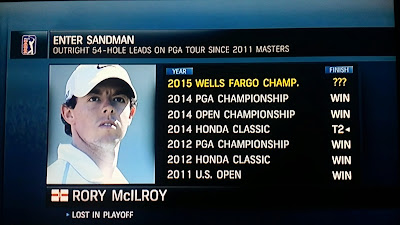 Forecast for Sunday
Strong chance of Closing with Scattered Bogies.
Rory will be going for it. So, he'll miss a few off the Tee. 70/30 he shoots low again or drops 3 down to (-15). I suspect they will adjust the Pin Positions to defend against another course record. However, Rory closed 5 out of 6 of his last 6 54 hole leads. 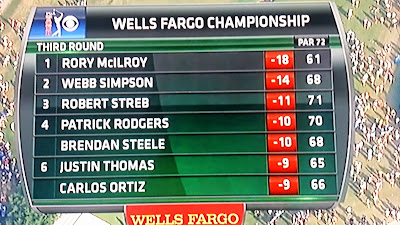 Web Simpson
is Rory s closest pursuer, 4 back at (-14). If they do defend the course with tougher pin locations - it will still help Rory - making it even hard for anyone to shoot low and catch him.


Race for 2nd
As expected - Rory closed comfortably. He did stall on the from 9 at first - giving the field a chance to catch up. A few tried but hard to shoot 65 or better twice and catch him.

Patrick Rodgers
who was playing on an exemption - was his closest pursuer. He fought hard for against Web Simpson for a sole 2nd. That would have given him enough prize money to qualify for a full exemption on the PGA tour.  They tied in the end - but even that purse leaves him only about 50k short - with a start this week at Colonial. 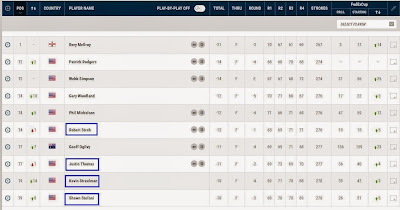 NOTE: STREB WAS A PICK - BUT NOT ON BET SHEETS VEGAS - SO NOT ON ROULETTE BOARD

The Mighty Will Fall
or so we hope with Odds on Sergio and Rory at Odds so low we can't afford them. Sergio helped our cause missing puts and turning in a first round 3 Over.

Geography Lesson
I forgot how close Spain is to Africa. South Africans from the Sunshine Tour are giving the Spaniards a run for there money. 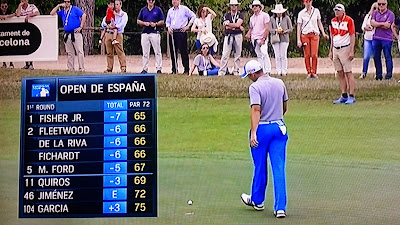 ____ROUND 2_____
Sergio Barely
survives and is well off the lead.
Grillo
Challenged the lead and fell back. 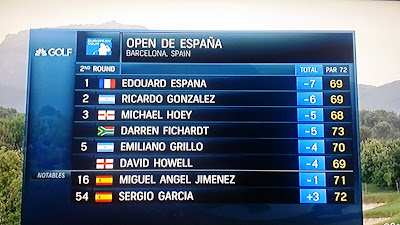 Grillo High and Dry
Hot, Dry conditions and turtle back greens have sent a lot of players packing. Grillo once again challenged the lead only to miss green and puts and fall from (-6) to (-3). He did finish at (-4) 3 off the lead. He still has a chance to get his first win tomorrow - but will need to start hitting green and puts. Keep in mind I did not handicap this tourney. I saw Grillo and had to bet.
Then I saw Oleson and UIhlein and jumped on them too - those 2 came in hot as hell. Oleson missed the cut (+9). Uihlein currently (+7). 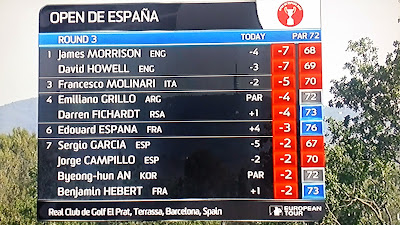 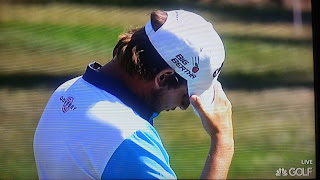 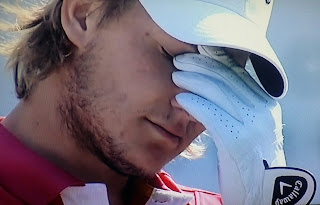 Emilio Grillo hanging his head after being in contention and failing to close. In his defense, the course was dry and treacherous. He has a lot of raw talent.

However, missing fairways and 6 foot par puts down the stretch - tells me he needs some work. Course management and the ability to maintain his mechanics under pressure. Tournaments are not won - they are captured. He will need to be strategic, calculating and have every aspect of his game together to get his first win. 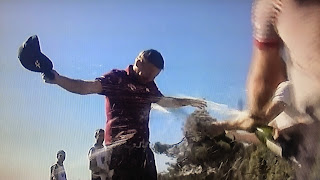 Showered in Riches
Morrison gets the big check and a champagne shower from his buddies. 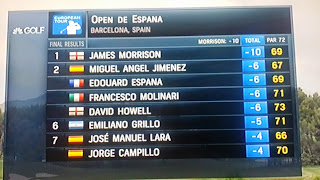 Euro Golf Roulette
Did not produce a winner this week.
We did have 2 on the First Page of the Final Leaderboard.Jimenez and Grillo